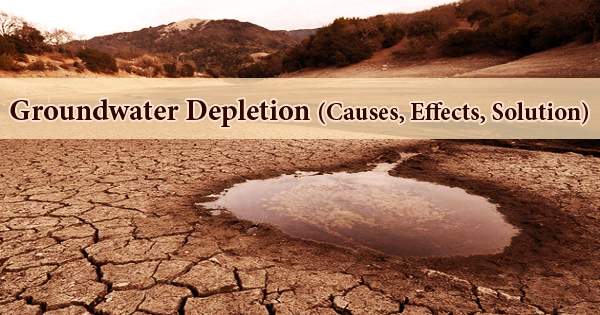 The unavoidable and natural result of extracting water from an aquifer is groundwater depletion. It is a significant environmental threat; water makes up the bulk of our bodies and the Earth. The world’s main source of available, freshwater is groundwater. In many parts of the world, particularly where there is no supply of surface water, domestic, agricultural, and industrial water needs can only be met by the use of underground water. Groundwater withdrawals exceed 750-800 km3/year globally. Economic benefits have been dramatic from groundwater use. However, groundwater supplies have been exhausted in many areas to the point that well yields have decreased, pumping costs have increased, water quality has declined, marine habitats have been destroyed, and land has subsided irreversibly.

In order to live, humans and animals need water, as our bodies do not function without it. We also need water to help us grow crops, to power machines, and to keep us comfortable. Societies need much more clean water than we obtain from rainfall and surface water, which is why groundwater is so widely used. A key problem associated with groundwater usage is groundwater depletion, a concept often described as long-term water-level declines caused by continuous groundwater pumping. To provide us with groundwater, nature goes through a specific phase. The surface water that we can see is heated by the Sun and as evaporation goes into the atmosphere. Then water vapor produces precipitation, water that falls as rain and snow from the atmosphere. When water falls from the sky and into the surface, it is absorbed into the earth and then deposited in aquifers as groundwater.

The main regions of North Africa, the Middle East, South, and Central Asia, North China, North America, and Australia, and localized areas around the world are affected by excessive groundwater depletion. Although the scale of the issue has not been quantified globally, the senior author’s on-going research indicates that during the 20th century, about 700-800 km3 of groundwater was drained from aquifers in the US. Groundwater depletion has been brought on by the growing population and the careless use of water. When people began wasting water instead of using it wisely, the problem got worse. Quick industrialization has also significantly increased the demand and use of water. Increasing farming practices and certain natural factors, such as global warming, are other explanations for groundwater depletion.

In certain situations, the depletion of the fresh groundwater that is more readily recoverable leaves a residual with a poorer quality of water. In part, this is due to induced drainage from the surface of the soil, confining layers, or neighboring aquifers containing saline or polluted water. The available amount of fresh groundwater in coastal areas, where many of the world’s largest cities are located, is limited by seawater intrusion and coning, which are caused by head reductions in the aquifer. Most generally, groundwater depletion happens because of the frequent pumping of water from the field. The more we pump water from the ground at a rapid pace, the harder it is for the groundwater to provide us with the amount of water we need as a growing planet with a population that continues to increase.

It is possible to view groundwater depletion from two distinct viewpoints. In one, depletion, regardless of water quality considerations, is taken literally and simply as a decrease in the amount of water in the saturated region. A second viewpoint sees depletion as a decline in the fresh groundwater available volume in storage. Water flows freely into the aquifers known as saturated rocks. There are big and small aquifers, and they are the deepwater reservoirs that collect water and retain it, allowing us to pump it for use. The quantity of water kept by aquifers is beyond amazing and can give us billions of gallons of water a day. Although this volume of water appears abundant, groundwater is a significant contributor to the supply of fresh water to the Planet and is responsible for supplying up to 40% of the world’s freshwater. It does not, therefore, have the capacity to recollect fast enough to be continuously sourced for our use.

Some groundwater depletion causes and impacts are neither clear nor easy to determine. Integrating maps of head shifts over the aquifer region is the most direct way to quantify the amount of water depleted from an aquifer. In order to compute the corresponding volume of water, the resulting aquifer volume is multiplied by an acceptable storage coefficient. A significant amount of groundwater goes to irrigation, but there is a slow decrease in groundwater supply. Without it, it would be incredibly difficult to supply crops and livestock with drinking water and water that would support people in periods of drought. The less water that is available, the less food we have and we will be faced with the problem of great demand and very little supply.

Some of the negative effects of groundwater depletion:

Groundwater in most physiographic and climatic settings contributes to streams. The proportion of stream water that comes from the inflow of groundwater varies depending on the geography, geology, and environment of an area. A lack of groundwater prevents extra water from flowing into reservoirs, rivers, and seas. This implies that over time, as the current surface water begins to evaporate, less water can enter. As the water becomes shallower, it will affect everything, including fish and wildlife, in that specific area. Future advances in water-level data collection and telemetry, database management systems, and information system networking are likely to make it easier to track water-level changes in the future.

Everyone should do their part to use less water wherever possible, given the imminent crisis of a mass water shortage. Water is so freely used that it is also part of ideas for outdoor decor and used for important attractions, such as amusement parks. By changing management priorities from identifying and creating new resources to growing, conserving, and reallocating existing supplies, communities respond to water resource depletion. At the same time, social priorities are shifting to value water for non-traditional purposes, such as the preservation of in-stream flows for aquatic habitats. These multifaceted problems will have to be dealt with by potential groundwater management.

Many people may not pay attention and are completely unaware of how necessary it is to avoid under-the-ground contamination from happening. Chemicals are usually laden with water from businesses and private homes that flow through the streets and drainage systems. These contaminants make their way into larger bodies of water, killing animals and the atmosphere and absorbing them into the soil. We discourage them from adding hazardous products to our water supply by carefully using less chemicals and discarding them. To help replenish aquifers, we may use alternative sources of water. Instead of pumping so much water from them at once, water from other sources will also allow aquifers time to refill.