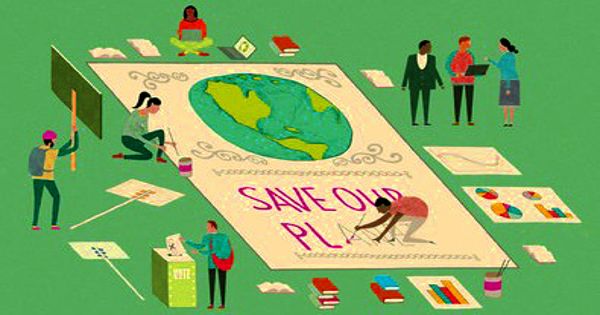 To avoid the worst effects of climate change, the world must achieve net-zero emissions by removing and storing more carbon dioxide from the atmosphere than we put into it. While strategies for reducing emissions, such as renewable energy, energy efficiency, and avoiding deforestation, are critical, they will not suffice on their own. To achieve net-zero emissions, strategies that actively remove CO2 from the atmosphere are required.

When most people hear the words “soil carbon storage,” “carbon capture and storage,” or “biochar,” they may give you a blank stare. However, if these climate change mitigation strategies are framed as clean and green approaches to reversing our planet’s dangerous warming, people may be more willing to listen—and even support—these efforts.

A cross-disciplinary collaboration led by Jonathon Schuldt, associate professor of communication at Cornell University, discovered that a majority of the U.S. public supports soil carbon storage as a climate change mitigation strategy, particularly when it is viewed as a “natural” strategy.

Researcher found that a majority of the U.S. public is supportive of soil carbon storage as a climate change mitigation strategy, particularly when that and similar approaches are seen as “natural” strategies.

“To me, that psychology part—that’s really interesting,” Schuldt said. “What would lead people, especially if they’re unfamiliar with these different strategies, to support one more than the other? Our study and others suggest that a big part of it is whether people see it as natural.”

The paper, “Perceptions of Naturalness Predict US Public Support for Soil Carbon Storage as a Climate Solution,” was published in the journal Climatic Change on May 26. Johannes Lehmann, Liberty Hyde Bailey Professor in the School of Integrative Plant Science (SIPS), Soil and Crop Sciences Section (CALS); Dominic Woolf, senior research associate in SIPS; Shannan Sweet, postdoctoral associate in the Lehmann Lab; and Deborah Bossio of the Nature Conservancy are among the co-authors.

To estimate public support for soil carbon storage and how it compares to other leading carbon dioxide removal strategies, Schuldt’s team analyzed results from a survey of 1,222 U.S. adults who reported believing in climate change at least “somewhat.”

As the world grapples with rising temperatures, melting ice caps, and increasingly violent weather events, mitigation strategies such as solar and wind power, electric vehicles, and sustainable land use and biodiversity, to name a few, are gaining traction.

The survey data came from an online poll conducted by NORC at the University of Chicago, a leading survey research firm, from September 19 to October 4, 2019. The researchers surveyed respondents about their perceptions of naturalness and policy support for five CO2 removal strategies: afforestation and reforestation; bioenergy plus carbon capture and storage; direct air capture; soil carbon storage; and soil carbon storage with biochar. Each respondent was shown a randomized set of three options and asked to estimate the likelihood that they would support each one.

They were also asked to rate their level of agreement with each of five statements related to humans’ tampering with nature.

“We expected and discovered that Democrats support all types of climate strategies more than Republicans,” Schuldt said. “But I believe we sometimes make the mistake of categorizing all Democrats as supporters and all Republicans as opponents. That is not correct.”

The ultimate goal, according to Schuldt, is for policymakers to be able to present the public with palatable options for dealing with climate change. “There are a variety of solutions available,” he said. “Then, politically, the question becomes, where do you begin? Which has the most support? I believe our data contributes to this.”

There are both natural and technological strategies for removing carbon dioxide from the atmosphere and storing it in various places, such as trees and plants, soils, underground reservoirs, rocks, the ocean, and even concrete. Different carbon-removal strategies have different risks and co-benefits.