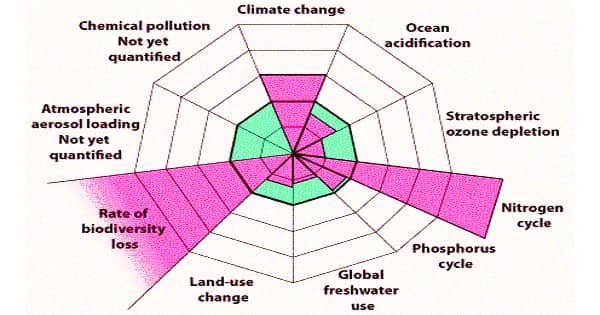 The planetary boundary (PB) concept, introduced in 2009, aimed to define the environmental limits within which humanity can safely operate. It is a concept involving Earth system processes that contain environmental boundaries. Planetary boundaries are scientifically based levels of human pressure on critical global processes that could create irreversible and abrupt change to the ‘Earth System’ – the complex interaction of atmosphere, ice caps, sea, land, and biota.

Planetary boundaries represent a precautionary approach, based on maintaining a Holocenelike state of the Earth System. This approach has proved influential in global sustainability policy development.

A total of nine planetary boundaries were previously defined. These were: climate change, loss of biodiversity, ozone depletion, ocean acidification, biogeochemical flows (the flow of nitrogen and phosphorus), land-system change. It was proposed in 2009 by a group of Earth system and environmental scientists, led by Johan Rockström from the Stockholm Resilience Centre and Will Steffen from the Australian National University. 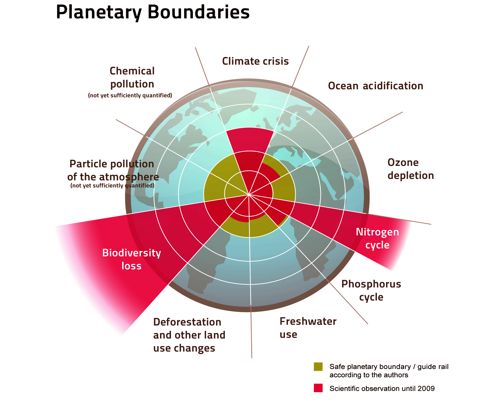 The group wanted to define a “safe operating space for humanity” for the international community, including governments at all levels, international organizations, civil society, the scientific community, and the private sector, as a precondition for sustainable development. Crossing planetary boundaries increases the risk of moving the Earth System to a state much less hospitable for human civilization than the one in which we have flourished over the past 11 000 years. The framework is based on scientific evidence that human actions since the Industrial Revolution have become the main driver of global environmental change. This framework contributes to such a paradigm by providing a science-based analysis of the risk that human perturbations will destabilize the ES at the planetary scale.

Beyond each boundary is a ‘zone of uncertainty’, where there is an increased risk of outcomes that are damaging to human wellbeing. According to the paradigm, “transgressing one or more planetary boundaries may be deleterious or even catastrophic due to the risk of crossing thresholds that will trigger non-linear, abrupt environmental change within continental-scale to planetary-scale systems.” Taken together the boundaries define a safe operating space for humanity.

The Earth system process boundaries mark the safe zone for the planet to the extent that they are not crossed. Of the nine boundaries, the researchers report that four of these have now been crossed: extinction rate (one of two indicators for biosphere integrity), deforestation, atmospheric carbon dioxide (an indicator for climate change), and the flow of nitrogen and phosphorus. Approaching a boundary provides a warning signal to decision-makers, indicating that we are approaching a problem while allowing time for corrective action before it is too late.