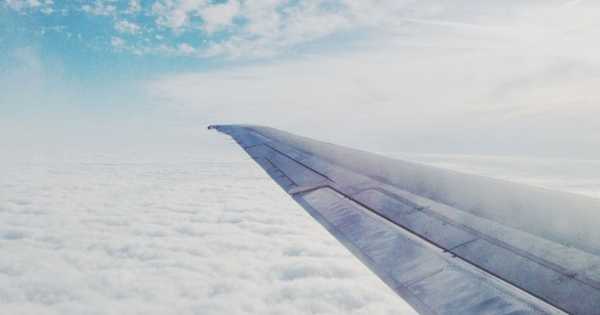 Rain, snow, and ice have long been transportation’s adversaries. Flying has added a new dimension, especially when it comes to ice. Ice can form quickly on airfoils and air inlets under certain atmospheric conditions. Ice can form on aircraft leading-edge surfaces at altitudes where freezing temperatures begin on days when there is visible moisture in the air.

Unless they are disturbed, water droplets in the air can be supercooled to below freezing without turning into ice. This unusual occurrence is caused in part by the surface tension of the water droplet, which prevents the droplet from expanding and freezing. However, when aircraft surfaces disturb these droplets, they immediately turn to ice on the aircraft surfaces.

How do you keep ice from forming on a plane while it’s in-flight? Jonathan Boreyko, associate professor in the Department of Mechanical Engineering, is leading a team that is collaborating with Collins Aerospace to develop a method that uses ice itself. They developed a de-icing method that uses how frost grows on pillar structures to suspend ice as it forms into a layer that is easier to remove in a study published in Physical Review Letters.

Ice formation on airplanes can be both an annoyance and a health risk. Winter travelers are accustomed to checking airport departure boards for ice delays, and the National Transportation Safety Board reports 52 in-flight accidents attributed to ice formation between 2010 and 2014, resulting in 78 fatalities.

How do you control ice formation on a plane, even when it’s in-flight? Engineers are developing an approach using ice itself. They created a de-icing method that exploits how frost grows on pillar structures to suspend ice as it forms into a layer that’s easier to remove.

It is possible to de-ice a plane at the airport before takeoff, but planes also experience plummeting temperatures and rapid ice formation in flight. When ice forms on the wings, it greatly impairs a pilot’s ability to operate the aircraft safely. The researchers believe that equipping planes with the ability to remove ice while flying at altitudes between 35,000 and 42,000 feet would provide a better set of tools for maintaining safety.

Putting ice on a pedestal

Boreyko’s team began with the understanding that water droplets behave differently depending on the surface. They hoped to use Cassie’s Law, which states that air can be trapped beneath water drops if the drops are suspended atop a bumpy and water-repellent structure. The researchers attempted to form ice in a layer with lower adhesion to the surface by using a structure that could trap air underwater in this “Cassie state.”

Boreyko explained that making a surface water-repellent typically requires a chemical coating that must be replenished on a regular basis, and the bumpy surface also wears over time. The team chose an unconventional approach in order to create a water-repellent surface that does not require fragile chemical coatings or ultra-fine bumps. Instead, they chose a simple and long-lasting structure made of millimeter-sized aluminum pillars.

Boreyko’s team designed a series of pillars that were each one millimeter tall and half a millimeter wide. The millimeter-sized pedestals were machined into a pattern. As the temperature dropped, frost grew preferentially on the pillars’ tops, resulting in elevated frost tips. Water was absorbed into this porous frost layer as more was added. Water drops were caught on the frost pedestals after being impacted on the surface.

As lead author Hyunggon Park described it, the freezing drops formed tiny “ice bridges” that sealed the air gaps in the valleys between the frost-tipped pillars. “When impacting water drops froze on the surface, we noticed something interesting: the water drops were being caught by the frost tips and building ice bridges to trap air pockets beneath,” Park explained. Over time, an air-tight ice canopy formed over the frost-tipped pillars.

Whereas other de-icing methods may still allow an ice sheet to adhere more directly to a large surface area, trapped air gaps cause the sheet to be suspended, reducing the amount of adhesion ice has to the surface.

“We discovered that by using larger pillars instead of nanostructures and frost tips instead of a hydrophobic coating, we can get the same benefit of trapping air beneath the forming ice while avoiding durability concerns,” Boreyko explained. “This should make our approach applicable to improving de-icing on aircraft or heat exchangers.”

With a weaker bond, the air pockets can be used to push ice away. As Boreyko’s team continues to develop their method, this will be the next step in their process.