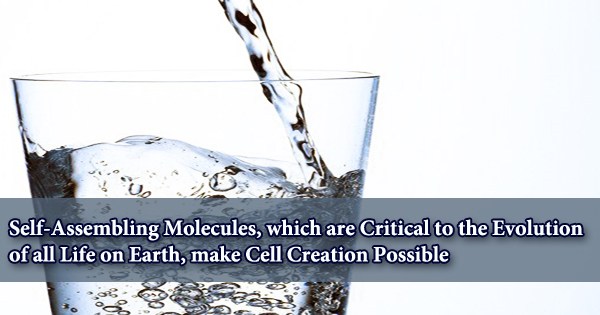 Self-Assembling Molecules, which are Critical to the Evolution of all Life on Earth, make Cell Creation Possible

In nature, molecules at the boundaries of various liquids can interact to form new structures. Cell formation is made possible by these self-assembling molecules, which are crucial to the evolution of all life on Earth. They may also be designed to fulfill certain activities, and a group of Penn State researchers has taken advantage of this to create a material that can remove persistent contaminants from water.

The findings were recently published in the journal Advanced Functional Materials.

Scott Medina, associate professor of biomedical engineering and corresponding author on the research, said, “We took inspiration from biological systems to see if we can get similar phenomena to emerge with non-biological molecules.”

The researchers chose to add fluorine, a non-natural element, into an amino acid and combine it with a fluorinated oil to direct its molecular structure for their experiment. The fluorinated oil was mixed with water and produced a bead with a fluorine droplet surrounded by an amino acid coating. The components of the bead were reorganized to create a film when the researchers tilted the vial to expose it to air. When agitated, this film, which is made up of a thin layer of fluorinated oil surrounded by two layers of tiny amino acid crystalline structures, may reorganize itself into a bead and pick up more fluorinated molecules.

“Fluorines don’t play well with others, so if you put them together there are very strong interactions,” Medina said. “Fluorinated contaminants in water want to separate themselves from the water and find other fluorine-rich matter.”

This behavior, as well as the compound’s ability to transition between film and bead states, piqued the researchers’ interest in pollutant capture. PFAS (Per and polyfluoroalkyl substances) are fluorine-containing synthetic compounds that are often utilized in the manufacture of water and grease-repellent goods. Because of their chemical structure, they can accumulate in both the environment and the human body over time.

“Nature hasn’t evolved ways to break down fluorine-containing molecules efficiently, so these compounds stick around for a long time,” Medina said. “They infiltrate wastewater and soil, find their way into drinking water and food, and we eat them, and our bodies don’t do a very good job of degrading them.”

The researchers used contaminated water in a plastic container coated with their fluorinated amino acid film to evaluate the novel compound’s ability to collect PFAS. Within two hours, the film had caught PFAS chemicals and could keep them for up to 24 hours. The PFAS-containing film may be agitated at this point to reform into a cohesive bead that could be readily recovered from the now-purified water.

The researchers intend to pursue these pollutant extraction capabilities further, looking at not just water purification but also the possibility of extracting chemicals from the air. With more study into its uses, the fluorinated chemical might become a multi-purpose pollutant removal agent that could be used in a number of situations.

“There’s a lot of effort being placed into investigating the toxicology of PFAS and how to regulate them,” Medina said. “This material may be used to remove PFAS from drinking water, and we believe it could be useful in a variety of other applications.”