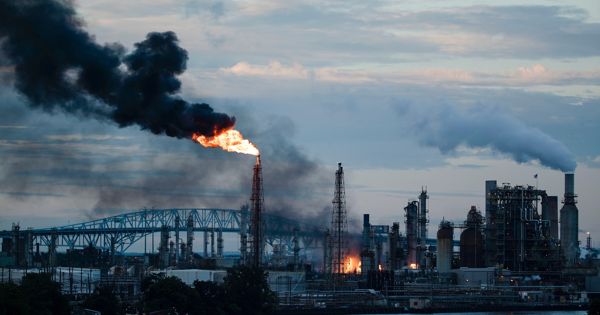 Climate change is a man-made disaster that is already undoing gains in the fight against poverty and inequality. According to research, toxic pollution disproportionately affects poorer populations because businesses emit more pollutants and spend less money on waste management in areas with lower average incomes.

The study, published in the European Economic Review by Lancaster University Management School and Texas Tech University, looked into the relationship between the location choices of potentially polluting firms and levels of local income to see if firms made strategic decisions on site locations based on population demographics.

The researchers studied potentially polluting firms across Texas and discovered a link between lower income areas and the likelihood of potentially polluting firms locating there. Their findings, based on data from the US Environmental Protection Agency’s Toxic Release Inventory, also revealed that the relative frequency of toxic releases decreased as household income increased.

“We looked at whether firms made location decisions based on demographics, particularly income, of the local areas, as well as whether firms made different decisions on limiting the possibilities of toxic release through waste management based on those same statistics,” said co-author Professor Dakshina De Silva of Lancaster University’s Department of Economics.

“The patterns we observed lead us to conclude that potentially polluting firms seek to maximize their expected profits while also recognizing the financial risk associated with a release in different areas.”

Toxic chemical releases in the environment are costly for businesses because they must implement clean-up programs, pay penalties, and compensate local residents for damages. Higher incomes – and associated property values – raise the costs because damages are linked to lower property values and lost income due to work restrictions.

“Potentially polluting firms seeking to maximize profits will be concerned about the liability of toxic releases and the threat such releases pose to their financial results,” said Lancaster University co-author Dr Anita Schiller. “As a result, they will consider the demographics of an area when valuing the legal costs and compensation they would have to pay out in the event of a toxic release, and balance this with the cost of reducing the likelihood of such a release.”

“In areas with higher incomes and property values, compensation levels will rise in the event of an incident, as will the possibility of collective action by residents and businesses. Potentially polluting companies must also consider the financial risk of a release as well as the costs of managing the likelihood of such an incident.”

The researchers discovered that toxic release levels had steadily declined since 2000, by 34% between 2000 and 2006 and another 21% since 2006, but that this drop was not uniform, with potentially polluting firms reducing releases through waste management where local opposition to their presence was strongest.

“Combined with our finding that economic activity and local income are linked with waste management spending and levels of toxic releases,” co-author Dr. Aurelie Slechten added, “this implies that the group most affected by releases will be poorer populations in industrial areas.”

Without additional action, simply requiring firms to report their releases will not reduce the disparity in exposure to toxic releases faced by certain groups. Regulation of compensation schemes must be given serious consideration.

Climate change exacerbates fragility and increases the risk of conflict and disaster. Over the last decade, climate-related disasters have been the leading cause of internal displacement, displacing an estimated 20 million people per year. Climate change is already causing an increase in hunger. People are being displaced from their livelihoods, homes, and communities as a result of climate shocks and persistent climate stress, with indigenous peoples being among those most vulnerable to displacement. Climate change increases the need for life-saving aid and protection for those affected by humanitarian disasters.