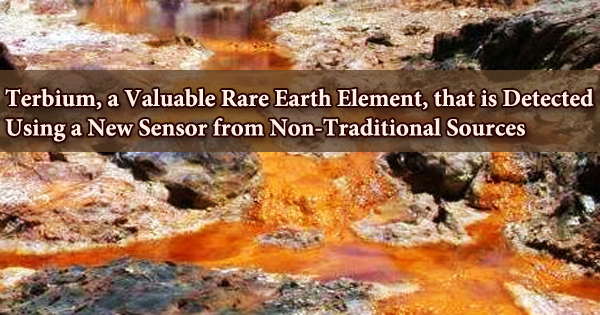 Terbium, a Valuable Rare Earth Element, that is Detected Using a New Sensor from Non-Traditional Sources

Terbium, a valuable rare earth element, may be detected in complicated environmental samples such as acid mine waste using a novel luminous sensor. The sensor, created by Penn State researchers, uses a protein that attaches to rare earth elements very precisely and may be used to help establish a domestic supply of these metals, which are utilized in technology like smartphones, electric car batteries, and energy-efficient lighting. The sensor is described in an article published in the Journal of the American Chemical Society on 25th August, 2021.

Terbium, one of the rarest of rare earth elements, is utilized in high-efficiency lighting and solid-state electronics and generates the green hue in mobile phone displays. Obtaining terbium and other rare earth elements from the environment, however, presents a number of chemical, environmental, and political difficulties. Another issue is developing new sources of these metals, which necessitates the development of effective detection technologies.

For example, the gold standard method of identifying rare earth elements in a sample, ICP-MS, a kind of mass spectrometry, is costly and inconvenient. Portable techniques, on the other hand, are less sensitive and work poorly in complicated environmental samples, where acidic conditions and other metals might make detection difficult.

Because of the development of a tight, black oxide layer that may be described as a mixed oxide consisting of Tb2O3 and TbO2, the metal is reasonably stable in air even at high temperatures. Terbium reacts quickly with diluted acids, but it is insoluble in HF because the fluoride ion shields the metal from further reactivity by producing a protective coating of TbF3.

Carl Mosander, a Swedish scientist, was the first to isolate terbium in Stockholm in 1843. He had already studied cerium oxide and extracted a new element, lanthanum, from it, and now he turned his attention to yttrium, which was found in 1794, in the hopes of discovering another element.

Mosander was able to extract two more metal oxides from it: terbium oxide (yellow) and erbium oxide (rose pink), which he published in 1843. However, this was not the end of the story, as more rare earth elements were discovered later in the century (aka lanthanoids). Today, a technique called as liquid-liquid extraction makes it simple to separate these components.

“There is not currently a domestic supply chain of rare earth elements like terbium, but they are actually quite abundant in non-traditional sources in the U.S., including coal byproducts, acid mine drainage, and electronic waste,” said Joseph Cotruvo, Jr., assistant professor and Louis Martarano Career Development Professor of Chemistry at Penn State, a member of Penn State’s Center for Critical Minerals, and senior author of the study. “We developed a luminescence-based sensor in this work that can detect and even quantify low terbium concentrations in complicated acidic materials.”

The researchers modified lanmodulin by adding the amino acid tryptophan to it in order to make it a better terbium sensor. Terbium is used to dope solid-state devices such as calcium fluoride, calcium tungstate, and strontium molybdate. It’s also utilized in mercury lamps and low-energy lightbulbs. It’s been utilized to increase the safety of medical x-rays by enabling for the production of the same quality image with a considerably shorter exposure period.

“Tryptophan is what is called a ‘sensitizer’ for terbium, which means that light absorbed by tryptophan can be passed to the terbium, which the terbium then emits at a different wavelength,” said Cotruvo. “One of the primary reasons terbium is utilized in technology like smartphone screens is because of its green hue. When the tryptophan-lanmodulin combination binds to terbium, we may quantify the quantity of terbium in the sample by observing the emitted light, or luminescence.”

The researchers created a number of different versions of the tryptophan-lanmodulin sensor, tweaking the tryptophan’s position so that it doesn’t interfere with lanmodulin’s capacity to attach to rare earth elements. These variations shed light on the protein’s essential characteristics that allow it to bind rare earth with such remarkable selectivity.

“One challenge with extracting rare earth elements is that you have to get them out of the rock,” said Cotruvo. “Nature has already done it for us with acid mine drainage, but locating rare earth is like finding a needle in a haystack. To reduce the environmental effect of acid mine drainage sites, we already have an infrastructure in place at both active and dormant mines. We can better focus extraction efforts to transform waste streams into income sources if we can use sensors to identify the areas with the most valuable rare earth elements.”

The sensor was then put to the test in real samples from an acid mine drainage treatment facility in Pennsylvania, an acidic sample with several other metals present and very low terbium values of 3 parts per billion. The sensor identified a terbium concentration in the sample that was comparable to what they discovered using the “gold standard” approach, indicating that the novel sensor may be used to detect low terbium concentrations in complicated environmental samples.

“We plan to further optimize the sensor so that it is even more sensitive and can be used more easily,” said Cotruvo. “We also hope to target other specific rare earth elements with this approach.”

Laser devices make use of terbium salts. In a magnetic field, a terbium, dysprosium, and iron alloy lengthens and shortens. This effect is used to create loudspeakers that sit on a flat surface, such as a window pane, and serve as a speaker.