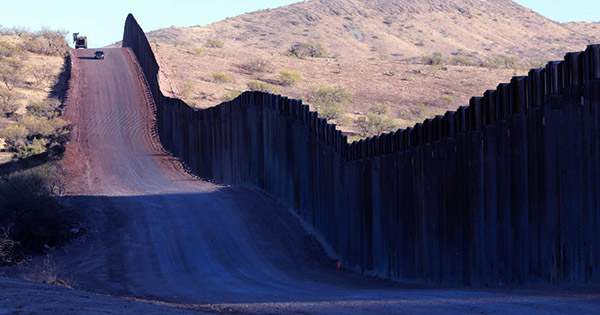 Arizona has experienced some incredible rains this summer, causing storms to sweep across the area. Among the damaged structures is Trump’s partially built border wall. Several media outlets, such as the Tucson Tribune, have reported that several flood gates have been torn down. A photo was taken by Fernando Sobrazo of the environmental group Cuenca Los Ojos, shared on Twitter from Kate Scott from the Mediterranean Wildlife Sanctuary, shows the broken walls.

So far it has cost $15 billion (paid by U.S. taxpayers, not Mexico as promised by Trump) and it has been severely damaged – not just in this case, but also from the general lack of erosion and maintenance. Environmental concerns about the wall have been routinely ignored. The wall has never been completely finished and the Biden administration has yet to stop construction completely.

Arizona rains fill up vegetation and state reservoirs; they also break down parts of the partially built border wall of former President Donald Trump on the U.S.-Mexico border, tear down gates and pack up what remains with sand and debris. Gizmodo shared a photo of Fernando Sobrazo capturing the consequences.

A spokesman for the U.S. Customs and Border Protection confirmed the damage to the Tucson Sentinel, which was caused by historic post-drought rainfall in the southwest. Last week, thousands of gallons of floodwaters flowed near Douglas, Arizona, which serves as a border entry port, the Tucson Sentinel reported.

The Trump administration said they had completed more than 400 miles of boundary wall when he was in office. However, the BBC reports that most of these miles were replacements for existing structures built by the previous US administration; Only 80 miles of new barriers were created. President Joe Biden canceled all border wall projects on his first day in office. Videos and photos provided by local environmentalists show that special movable gates on the banks of the Silver Creek River in Cochise County, Arizona, about 17 miles northeast of Douglas City, did not hold water in the border area.

According to the National Weather Service, the region received 2.15 inches of rain on Aug. 17, according to Lichen Jordahl, a promoter for the Center for Biological Diversity. “For many years, we have been warning and predicting that this is exactly what will happen and when it was a significant rainfall, it was not unusual. We always get heavy rains during the monsoon season,” Jordahl told Border Report on Monday. “It was a highly conceivable event. The construction of this wall was so bad advice and sick and hurried and caused a lot of damage to the wall that floated in the first summer.