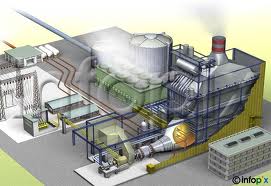 A roadmap for the development of new controls for power system stability is presented. The challenges are significant but the rewards in terms of economic payoff are high. The ability to push the limits of the power station depends on how well stable operation can be maintained against disturbances. The improvements in computers, communications and controllers are already being used in power station in many ways. By combining them to develop area-wide controls for power systems, stability can be controlled better to increase transmission limits. The roadmap outlined here ranks the conceptual developments by the difficulty of their implementation. The requirement of more complex computation or communication makes implementation more difficult, but several of the steps outlined above can be taken right now using existing technology without significant new development.

An Electric power station is a factory in which energy is converted from one form or another into Electrical Energy.

It is practically impossible to estimate the actual magnitude of the part that energy has played in the building up of present day civilization. The availability of energy has resulted higher agricultural and industrial production, better transportation facilities, a shorts but more beneficial working day and healthier and more balanced life.

Gas turbine power plant has relatively low cast and can be quickly put into commision.it requires less space. This plant is of smaller capacity and mainly used for peak load service. Gas turbine power plants are very promising for region where liquid or gaseous fuel is available in large quantities. Gas turbine installations require only a fraction of water used by their steam turbine counterparts. Gas turbine has made rapid progress during the past decade due mainly to the large amount of research. The size of gas turbine plants used in a large size used is about 50 MW. the thermal efficiency of gas turbine plant is about 22% to 25%.

The schematic arrangement (Fig. a) of a gas turbine power station can be divided into the following stages: Gas turbine power plants may be classified according to the following criteria:

I.      Types of Load. According to types of load the gas turbine power plants are classified as following.

a)      Peak load plant. A gas turbine power plant is of smaller capacity may use for peak load service. Peaking power plants operate only during times of peak demand. Demand peaks around the middle of the afternoon, so a typical peaking power plant may start up a couple of hours before this point and shut down a couple of hours after. However, the duration of operation for peaking plants varies from a good portion of the waking day to only a couple dozen hours per year.

c)      Standby plant. Gas turbine power plants are being used as standby plants in combination with hydro-electric and steam power plants where the cost of gas is not excessive.

II.Application. A gas turbine power plant smaller in sizes and weight as compare to an equivalent steam or diesel power plant so that it is more suitable for consideration such as in ships, aircraft engines, locomotives and transports.

III.Cycle. The working of gas turbine power plant is mainly based on  the two cycles:

a)      Open cycle. In a simple open cycle plant fresh atmospheric air is drawn into by the compressor continuously and heat is added by combustion of fuel then the products are expanded through the turbine and exhausted to atmosphere.

b)     Closed cycle. In the closed cycle plant air is continuously circulated and the heat by combustion of fuel is transferred to the air through heat transfer surface and thus the air does not mix with the products of combustion.

IV.Number of Shafts. According to number of shafts the open cycle gas turbine plant may be classified as follows:

a)      Single shafts open cycle. In this arrangement air flows from low to high pressure compressor which delivers it to combustion chamber and gasses then expand in the turbine.

b)     Twin shafts open cycle. The air enters the compressor and flows to combustion chamber then gases expand in the turbines.

a)      Liquid fuel.  This can be gasoline, kerosene and diesel oils.

A 5oC change in inlet air temperature varies efficiency by about 3% and output by about 4% in open cycle plant.

The main parts of gas turbine power plant are as following:

i.Centrifugal compressor. Centrifugal compressors use a vane rotating disk or impeller in a shaped housing to force the gas to the rim of the impeller, increasing the velocity of the gas. A diffuser (divergent duct) section converts the velocity energy to pressure energy. They are primarily used for continuous, stationary service in industries such as oil refineries, chemical and petrochemical plants and natural gas processing plants. Their application can be from 100 hp (75 kW) to thousands of horsepower. With multiple staging, they can achieve extremely high output pressures greater than 10,000 psi (69 MPa).

ii.Axial compressor. Axial-flow compressors use a series of fan-like rotating rotor blades to progressively compress the gas flow. Stationary stator vanes, located downstream of each rotor, redirect the flow onto the next set of rotor blades. The area of the gas passage diminishes through the compressor to maintain a roughly constant axial Mach number. Axial-flow compressors are normally used in high flow applications, such as medium to large gas turbine engines. They are almost always multi-staged. Beyond about 4:1 design pressure ratio, variable geometry is often used to improve operation. The injectors are at the right. Compressed air enters through the perforations. Exhaust gases exit at the left. You can see in the previous figure that a second set of cylinders wraps around the inside and the outside of this perforated can, guiding the compressed intake air into the perforations.

At the left of the engine is the turbine section. In this figure there are two sets of turbines. The first set directly drives the compressor. The turbines, the shaft and the compressor all turns as a single unit. At the far left is a final turbine stage, shown here with a single set of vanes. It drives the output shaft. This final turbine stage and the output shaft are a completely stand-alone, freewheeling unit. They spin freely without any connection to the rest of the engine. And that is the amazing part about a gas turbine engine there is enough energy in the hot gases blowing through the blades of that final output turbine to generate 1,500 horsepower and drive a 63-ton M-1 Tank! A gas turbine engine really is that simple.

f. Alternator. The gas turbine is coupled to the alternator which converts mechanical energy of the turbine into electrical energy. The output from the alternator is given to the bus-bars through transformer, circuit breaker and isolators.

g. Starting motor. Before starting the turbine compressor has to start by an electric motor which is mounted on the same shaft as that of the turbine. The motor is energized by the batteries. Once the unit starts, a part of mechanical power of the turbine drives the compressor and there is no need of motor now.

3.1.1Tirril regulator:-In this type of regulator, a fixed resistance is cut in and cut out of the exciter field circuit of the alternator. This is achieved opening and closing a shunt circuit across the exciter rheostat for this reason, it is also known as vibrating type voltage regulator.

In this type of regulator, exciter field rheostat is varied continuously or in small steps instead of being first completely cut in and then completely cut out as in trill regulator. For this purpose, a regulating resistance is connected in series with the field circuit of the exciter. Fluctuations in the alternator voltage are detected by a control device which actuates a motor. The motor drives the regulating rheostat and cuts or cuts in some resistance from the rheostat, thus charging the exciter and hence the alternator voltage.

In the circuit of a brown-boveri voltage regulator. It also works on the” overshooting the mark principle “and has the following four important parts:

Single-phase induction regulator: a single phase induction regulator is illustrated in fig. in construction, it is similar to a single phase induction motor except that the rotor is not allowed to rotate continuously but can be adjusted in any position either manually or by a small motor. The primary winding AB is wound on the stator and is connected across the supply line. The secondary winding CD is wound on the rotor and is connected in series with the line voltage is to be controlled.

Three phase induction regulator: in construction, a 3-phase induction regulator is similar to a 3-phase induction motor with wound rotor except that the rotor is not allowed to rotate continuously but can be held in any position by means of a worm gear. the primary winding either in star or delta are wound on the stator and are connected across the supply. The secondary windings are wound on the rotor and the six terminals are brought out since these windings are to be connected in series with the line whose voltages to be controlled.

The excitation control method is satisfactory only for relatively short lines. however, it is not suitable for long lines as the voltage at the alternator terminals will have to be varied too much in order that voltage at the far end of the line may be constant. Under such situations, the problem of voltage control can be solved by employing other method. The voltage drop in the line is supplies by changing the secondary e.m.f of the transformer through the adjustment of its number of turns.

3.3.1. off load tap-changing transformer: at figure shows the arrangement where a number of tapping have been provide on the secondary. as the position of the tap is varied, the effective number of secondary turns is varied and hence the output voltage of the secondary can be changed. thus referring to fig when the movable arm makes contact with stud 1,the secondary voltage is minimum and when with stud 5,it is maximum. during the period of light load, the voltage across the primary is not much below the alternator voltage and the load increases, the voltage can be kept at the previous value by placing the movable arm on a higher stud.

At fig shows diagrammatically auto-transformer tap changing. Here, a mid-tapping auto-transformer or reactor is used. one of the lines is connected to a series of switches across the odd tapings and the other end b is connected to switches across even toppings’ short circuiting switch s is connected across the auto transformer and remains in the closed position under normal operation. in the normal operation there is no inductive voltage drop across the auto-transformer. Referring to fig it is clear that with switch 5 closed, minimum secondary turns are in the circuit and hence the output voltage will be the lowest. On the other hand, the voltage will be maximum when switch 1 is closed.

A gas turbine extracts energy from a flow of hot gas produced by combustion of gas or fuel oil in a stream of compressed air. It has an upstream air compressor (radial or axial flow) mechanically coupled to a downstream turbine and a combustion chamber in between. “Gas turbine” may also refer to just the turbine element.Energy is released when compressed air is mixed with fuel and ignited in the combustor. The resulting gases are directed over the turbine’s blades, spinning the turbine, and mechanically powering the compressor. Finally, the gases are passed through a nozzle, generating additional thrust by accelerating the hot exhaust gases by expansion back to atmospheric pressure.Energy is extracted in the form of shaft power, compressed air and thrust, in any combination, and used to power aircraft, trains, ships, electrical generators, and even tanks.