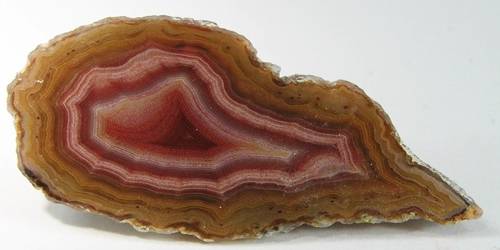 Agate is a rock consisting primarily of cryptocrystalline silica, chiefly chalcedony, alternating with microgranular quartz. It is a fine-grained variegated chalcedony having its colors arranged in stripes, blended in clouds, or showing mosslike forms. It is a very popular stone in various feng shui cures and carvings.

It is named after the Achates River (now known as the Dirillo River) on the island of Sicily, Italy, whose upper waters were an ancient source of this gemstone. It is characterized by its fineness of grain and variety of color. Although agates may be found in various kinds of host rock, they are classically associated with volcanic rocks and can be common in certain metamorphic rocks. Agate forms in all mineral environments, but it’s most commonly found in igneous rocks. It is a banded form of finely-grained, microcrystalline Quartz. The lovely color patterns and banding make this translucent gemstone very unique. The formation of Agate is most often from the deposition of layers of silica filling voids in volcanic vesicles or other cavities. The layers form in stages with some of the new layers providing an alternating color.

Industrial uses of agate exploit its hardness, ability to retain a highly polished surface finish and resistance to chemical attack. It has traditionally been used to make knife-edge bearings for laboratory balances and precision pendulums, and sometimes to make mortars and pestles to crush and mix chemicals. It has also been used for centuries for leather burnishing tools.

Agate is found all over the world including Africa, Asia, Brazil, Egypt, Germany, India, Italy, Mexico, Nepal, and the USA. Some Agates have created their own identities and are easily recognizable from the lot because of their unique colors and patterns, like the Botswana Agate, Fire Agate, Dendritic Agate, Moss Agate, and Blue Lace Agate.