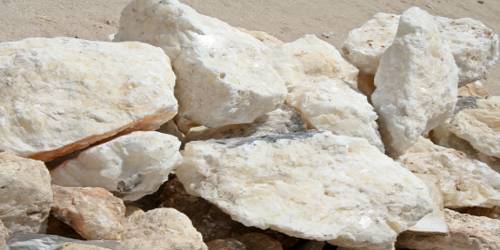 Alabaster is a mineral or rock that is soft and often used for carving, as well as being processed for plaster powder. It is compact fine-textured usually white and translucent gypsum often carved into vases and ornaments. It normally is snow-white and translucent but can be artificially dyed; it may be made opaque and similar in appearance to marble by heat treatment.

The term is used in different ways by archaeologists and the stone processing industry on the one hand, and geologists on the other. The first use is in a wider meaning, covering varieties of two different minerals: the fine-grained massive type of gypsum, as well as the fine-grained banded type of calcite. Geologists only define the gypsum variety as alabaster. Chemically, gypsum is a hydrous sulfate of calcium, while calcite is a carbonate of calcium.

Both types of alabaster have broadly similar properties. They are usually light-colored, translucent and soft stones that have been used throughout human history mainly for carving decorative artifacts. The two kinds are readily distinguished by differences in their hardness: gypsum alabaster is so soft it can be scratched with a fingernail (Mohs hardness 1.5 to 2), while calcite cannot be scratched in this way (Mohs hardness 3), although it does yield to a knife. Moreover, calcite alabaster, being a carbonate, effervesces when treated with hydrochloric acid, while gypsum alabaster remains nearly unaffected when thus treated.

The purest alabaster is a snow-white material of fine uniform grain, but it often is associated with an oxide of iron, which produces brown clouding and veining in the stone. The coarser varieties of gypsum alabaster are converted by calcination into a plaster of Paris, and are sometimes known as “plaster stone.”

Some facts about Alabaster

It is believed that Alabaster is connected with spirituality; hence it works wonderfully in making a person spiritual or draws things of the spirit. It is well known for its soaking quality, as it can absorb the energy of other stone, which one is carrying with Alabaster. Therefore, it becomes one stone which comprises energies of two.