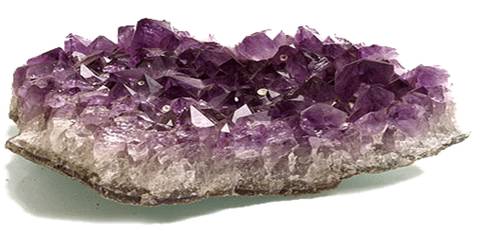 Amethyst is a violet variety of quartz often used in jewelry. It is a purple variety of quartz (SiO2) and owes its violet color to irradiation, iron impurities (in some cases in conjunction with transition element impurities), and the presence of trace elements, which result in complex crystal lattice substitutions. The hardness of the mineral is the same as quartz, thus it is suitable for use in jewelry.

It is one of several forms of quartz. Amethyst is a semiprecious stone and is the traditional birthstone for February. Amethyst is produced in abundance from the state of Minas Gerais in Brazil where it occurs in large geodes within volcanic rocks. Many of the hollow agates of southwestern Brazil and Uruguay contain a crop of amethyst crystals in the interior. Artigas, Uruguay, and neighboring Brazilian state Rio Grande do Sul are large world producers exceeding in quantity Minas Gerais, as well as Mato Grosso, Espirito Santo, Bahia, and Ceará states, all amethyst producers of importance in Brazil.

It occurs in many localities in the United States. Among these may be mentioned: the Mazatzal Mountain region in Gila and Maricopa Counties, Arizona; Red Feather Lakes, near Ft Collins, Colorado; Amethyst Mountain, Texas; Yellowstone National Park; Delaware County, Pennsylvania; Haywood County, North Carolina; Deer Hill and Stow, Maine and in the Lake Superior region of Minnesota, Wisconsin and Michigan. Amethyst is relatively common in the Canadian provinces of Ontario and Nova Scotia. The largest amethyst mine in North America is located in Thunder Bay, Ontario.