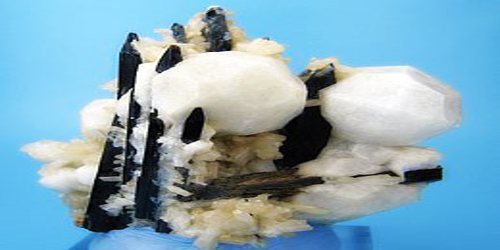 Analcime, also called analcite (from the Greek analkimos – “weak”), common feldspathoid mineral, a hydrated sodium aluminosilicate (NaAlSi2O6·H2O) that occurs in seams and cavities in basalt, diabase, granite, or gneiss and in extensive beds thought to have formed by precipitation from alkaline lakes. It is a member of the zeolite group, and often occurs together with other zeolites.

The name Analcime is derived from the Greek term “an alkimos”, meaning “not strong”, in allusion to the weak pyroelectricity exhibited by this mineral.

However, it is closely related in structure to the feldspathoid group, and is occasionally also classified as a feldspathoid together with the similar mineral Leucite. However, most mineralogical sources, including the IMA, classify Analcime only as a zeolite and not as a feldspathoid.

Analcime is usually classified as a zeolite mineral, but structurally and chemically it is more similar to the feldspathoids. Large colorless crystals of Analcime are a great rarity although small transparent crystals are abundant. Faceted gems are extremely rare and seldom seen even in large collections. The hardness is marginal for wear, but the mineral has no cleavage and should present no difficulties in cutting.

Although the crystal structure of Analcime appears isometric, it is usually off by only a fraction of an angle. This technically removes its classification from the isometric crystal system. Analyses of different Analcime crystals have yielded multiple results in crystal symmetry, with the most prevalent symmetry being tetragonal. However, truly isometric examples have been analyzed and do exist, thus making this mineral complex in its crystal classification. Due to Analcime’s appearance as an isometric mineral, and the fact that isometric examples do exist, we have placed this mineral within the isometric group for classification. 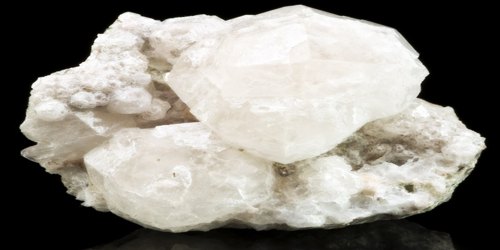 Sources and Properties of Analcime –

Well known locations for sourcing analcime include Croft Quarry in Leicestershire, UK; the Cyclopean Islands east off Sicily and near Trentino in northern Italy; Victoria in Australia; Kerguelen Island in the Indian Ocean; in the Lake Superior copper district of Michigan, Bergen Hill, New Jersey, Golden, Colorado, and at Searles Lake, California in the United States; and at Cape Blomidon, Nova Scotia and Mont Saint-Hilaire, Quebec in Canada; and in Iceland, and now in Namibia.

Extremely large, single Analcime crystals were found in Russia near the Tunguska River, Evenkia, Siberia. Small gemmy colorless crystals, sometimes with modified cubic faces, come from the Cyclopi Isles off the coast of Aci Trezza, Sicily, Italy, which is the type locality for this mineral. Good Analcime crystals have also come from Buco dell’Inferno and Rio Fromm, in the Siusi Alps, Bolzano Province, Italy; and white crystals on a contrasting clay matrix from the Duingen Clay Pit, Alfeld, Lower Saxony, Germany.

Analcime crystals are usually clear, gray, or white in color with a bit of reddish, yellowish, and greenish tint. These crystals have a vitreous luster and can have a transparent to translucent appearance. There are no cleavages present and there are uneven fractures.

Analcime crystals are not known to be very hard crystals because they have a score of 5 to 5.5 in the Mohs hardness scale. It is a member of the Zeolite group. Its name is from the Greek word analkimos, which means weak.

Uses and Benefits of Analcime –

Analcime often occurs as the base stone that other types of stone are growing on, including minerals such as Natrolite, Calcite, Prehnite and Ruby. Also known as Analcite, the color of these crystals may be gray, pink, green, yellow, white or colorless.

Analcime is a good crystal to have because of its abilities to increase our mental clarity. It will unlock, activate, balance, and align our heart chakra as well. This crystal will support us in achieving a healthy physical, emotional, and mental state when we are going through changes or transformations in your life. The healing energies of this crystal will also keep us grounded and strong because they will make us focus on the things that we should be thankful for.

These stones are known to have a number of useful healing attributes that may specifically interest crystal healers who work within the etheric body to aid healing. They are known to mitigate frailty that has manifested in the etheric layers, with a particular emphasis on their action to clear weakness and negative energy from within all layers of the etheric body.

Analcime crystals possess sweet heart-based energy that is very beneficial to any relationship. It’s known to be very helpful when people want to remove the struggles or disharmony in their relationship. If people are in a long-distance relationship, Analcime can help them remain faithful to their lover.

Analcime is also a powerful clarity crystal. If people use it with Pollucite, Turquoise, Pudding Stone, Smokey Quartz, Mariposite, Thomsonite, and Magnetite, they can amplify its abilities to clear their mind.