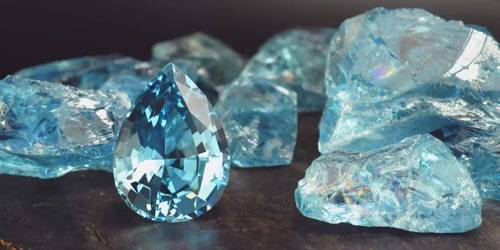 Aquamarine is a blue or cyan variety of beryl. It occurs at most localities which yield ordinary beryl. The gem-gravel placer deposits of Sri Lanka contain aquamarine. The name Aquamarine comes from the Latin aqua Marinus, meaning “water of the sea,” and refers to its sparkling ocean-like color. The pale blue, transparent crystal is a member of the Beryl family.

Green-yellow beryl, such as that occurring in Brazil, is sometimes called chrysolite aquamarine. The deep blue version of aquamarine is called maxixe. Maxixe is commonly found in the country of Madagascar. Its color fades to white when exposed to sunlight or is subjected to heat treatment, though the color returns with irradiation.

The pale blue color of aquamarine is attributed to Fe2+. Fe3+ ions produce golden-yellow color, and when both Fe2+ and Fe3+ are present, the color is a darker blue as in Maxixe. Decoloration of maxixe by light or heat thus may be due to the charge transfer between Fe3+ and Fe2+. Dark-blue maxixe color can be produced in green, pink or yellow beryl by irradiating it with high-energy particles (gamma rays, neutrons or even X-rays). In the United States, aquamarines can be found at the summit of Mt. Antero in the Sawatch Range in central Colorado. In Wyoming, aquamarine has been discovered in the Big Horn Mountains, near Powder River Pass. Another location within the United States is the Sawtooth Range near Stanley, Idaho, although the minerals are within a wilderness area which prevents collecting. In Brazil, there are mines in the states of Minas Gerais, Espírito Santo, and Bahia, and minorly in Rio Grande do Norte. The mines of Colombia, Zambia, Madagascar, Malawi, Tanzania, and Kenya also produce aquamarine.

The largest aquamarine of gemstone quality ever mined was found in Marambaia, Minas Gerais, Brazil, in 1910. It weighed over 110 kg (240 lb), and its dimensions were 48.5 cm (19 in) long and 42 cm (17 in) in diameter. The largest cut aquamarine gem is the Dom Pedro aquamarine, now housed in the Smithsonian Institution’s National Museum of Natural History.