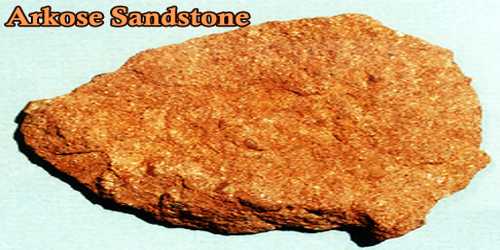 Arkose (/ˈɑːrkoʊz/) is a type of sandstone (sedimentary rock composed of cemented grains 0.06–2 millimeters (0.0024–0.08 inch) in diameter) containing at least 25% feldspar; primarily made up of quartz and feldspar grains together with small amounts of mica, all moderately well sorted, slightly worn, and loosely cemented with calcite or, less commonly, iron oxides or silica. Other notable minerals are micas, amphiboles, rock fragments, clay minerals, heavy minerals, etc.

Quartz is usually the dominant mineral in arkose, but feldspar makes up a significant part of the rock (in some cases feldspar may exceed quartz in content). There is no universal agreement, but often 25% of feldspar is set as a requisite for calling sandstone an arkose. This is actually more complicated because graywacke (muddy sandstone) may also contain more than 25% feldspar.

However, it is not an arkose for the majority of geologists. In most cases, sandstone that is called an arkose is coarse-grained enough that feldspar grains (which are usually rather angular) can be easily seen with the unaided eye. That has lead to a field description according to which any sandstone that contains appreciable amounts of feldspar in named an arkose. Feldspar is usually pink in color and is therefore easily seen. Such rocks may contain much less than 25% feldspar.

Arkose is often used informally by geologists as a feldspathic arenite because it is rich in feldspar (more than 25 percent of the sand grains) and distinguished from graywacke by its lighter color. In the absence of stratification, arkose may bear a superficial resemblance to granite, and it aptly has been described as reconstituted granite or granite wash. Like the granites from which they were formed, arkoses are pink or gray.

The term “arkose” was first used by a French geologist Alexandre Brongniart in 1826 who applied this term to some feldspathic sandstone in the Auvergne region of France. Also spelled arcose. Arkose is typically grey to reddish in color. The sand grains making up an arkose may range from fine to very coarse but tend toward the coarser end of the scale. Fossils are rare in arkose, due to the depositional processes that form it, although bedding is frequently visible. 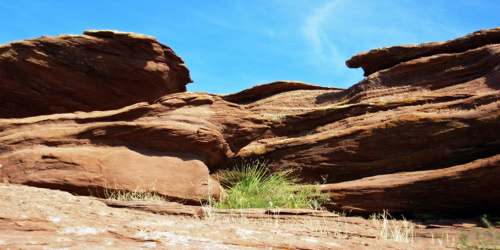 Arkose is commonly a current-deposited sandstone of continental origin, occurring as a thick, wedge-shaped mass of limited geographic extent (as in a fault trough or a rapidly subsiding basin); it may be strongly cross-bedded and associated with the coarse granite-bearing conglomerate, and it may denote an environment of high relief and vigorous erosion of strongly uplifted granitic rocks in which the feldspar was not subjected to prolonged weathering or transport before burial. It is not a rare type of sandstone (it forms up to 15% of all sandstones), but it needs special conditions to form and is therefore not very widespread. The defining property (large feldspar content) needs a good explanation because feldspar (although more common than quartz in the rocks) is much less resistant to weathering and is therefore usually destroyed (converted to clay) even before the quartz grains are liberated from the feldspar-rich rocks. Arkose may also occur at the base of a sedimentary series as a thin blanketlike residuum derived from and resting on a granitic rock. The central Australian inselberg Uluru (Ayers Rock) is composed of late Neoproterozoic/Cambrian arkose, deposited in the Amadeus Basin.

Hence, it was long believed that arkosic sandstones form in climatic regions which do not support weathering because they are either too dry or too cold. It definitely is the case in some instances because chemical weathering (which is the most important form of weathering) is heavily dependent on the availability of water and to a lesser extent warm temperature which accelerates chemical reactions. However, it is obvious that many arkose formations had no such conditions during their formation. Nowadays it is believed that arkose forms where there is a crystalline source material rich in feldspar (mostly granite or gneiss) and a high relief with consequent rapid erosion which gives no time to break up feldspar. This is the case with granitic batholiths which are surrounded by down-faulted blocks (grabens) which collect the eroded clastic detritus rich in feldspar. So it seems that relief plays a much more important role in the formation process than adverse climatic conditions do. Some older precambrian samples may resemble granite (because of secondary overgrowths of quartz and feldspar) so much that it might be difficult to tell them apart.

The geological significance of arkose has been much debated. Under normal conditions, most of the feldspar decomposes and is converted to clay minerals during weathering of the source rocks, whereas under conditions of extreme dryness or low temperatures, decomposition of the feldspar is inhibited or greatly retarded. Arkoses were, therefore, presumed to be derived from the erosion of a granitic terrane characterized by an arid or glacial climate.

Now, however, it is known that the feldspar may escape destruction and thus be transported and deposited with quartz sands if rates of uplift, erosion, and deposition are great enough. Under such conditions, irrespective of the climate, weathering processes are incomplete and the sands derived from such terrane are high in feldspar content. Arkoses, therefore, may be said to indicate either a climatic extreme or high relief. Most ancient arkose deposits seem to be the product of high relief.

Conglomeratic zones within the arkose sequence is a pretty common phenomenon. Sand grains making up arkose are usually either angular or poorly rounded. This indicates that in the majority of cases the transportation route has not been very long although there are exceptions. It is not correct to say that arkose is always deposited near its source area. The Mississippi sands near Cairo (Illinois, USA) contain about 25% feldspar but the source area is 1700 km upstream. Ripple marks are not very common in arkose and bedding features are generally thick and not very well-developed, although some units may show strong cross-bedding.