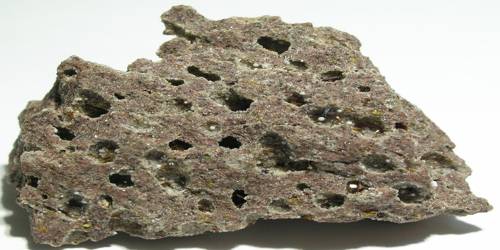 Armalcolite is a titanium-rich mineral with the chemical formula (Mg, Fe2+)Ti2O5. These tiny gray crystals were named for astronauts Armstrong, Aldrin, and Collins, who collected them on the moon. A few samples have been mined on Earth. It is not Radioactive.

It was first found at Tranquility Base on the Moon in 1969 and is named for Armstrong, Aldrin and Collins, the three Apollo 11 astronauts. Together with tranquillityite and pyroxferroite, it is one of three new minerals that were discovered on the Moon. Armalcolite was later identified at various locations on Earth and has been synthesized in the laboratory. Tranquillityite and pyroxferroite were also later found at various locations on earth with tranquillityite being the last mineral brought from the Moon which was thought to be unique, with no terrestrial counterpart, when it was found in Australia in 2011. The synthesis requires low pressures, high temperatures, and rapid quenching from about 1,000°C to the ambient temperature. Armalcolite breaks down into a mixture of magnesium-rich ilmenite and rutile at temperatures below 1,000°C, but the conversion slows down with cooling. Because of this quenching requirement, armalcolite is relatively rare and is usually found in association with ilmenite and rutile, among other minerals.

Armalcolite was originally found on the Moon, in the Sea of Tranquility at Tranquility Base, and also in the Taurus–Littrow valley and the Descartes Highlands. The largest amounts were provided by the Apollo 11 and 17 missions. It was later identified on Earth from samples of lamproite dikes and plugs taken in Smoky Butte, Garfield County, Montana, US. On the Earth, it also occurs in Germany (Nördlinger Ries impact crater in Bavaria), Greenland (Disko Island), Mexico (El Toro cinder cone, San Luis Potosí), South Africa (Jagersfontein, Bultfontein and Dutoitspan kimberlite mines), Spain (Albacete Province and Jumilla, Murcia), Ukraine (Pripyat Swell), United States (Knippa quarry, Uvalde County, Texas and Smoky Butte, Jordan, Montana) and Zimbabwe (Mwenezi District). Armalcolite was also detected in lunar meteorites, such as Dhofar 925 and 960 found in Oman.