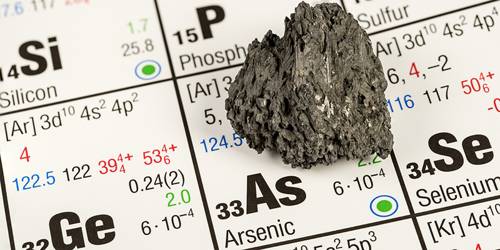 Arsenic is a chemical element with symbol ‘As’ and atomic number 33. The element takes its name from the Latin word “arsenicum” or the Greek word “arrenikos” meaning masculine, alluding to the mineral’s potent properties. It occurs in many minerals, usually in combination with sulfur and metals, but also as a pure elemental crystal. Arsenic is a metalloid. It has various allotropes, but only the gray form is important to the industry.

The primary use of metallic arsenic is in alloys of lead (for example, in car batteries and ammunition). It is a common n-type dopant in semiconductor electronic devices, and the optoelectronic compound gallium arsenide is the second most commonly used semiconductor after doped silicon. Its compounds, especially the trioxide, are used in the production of pesticides, treated wood products, herbicides, and insecticides. These applications are declining, however. Arsenic as a mineral can be identified in the field by its lead gray, gray, and white color variations. Its opaque form has {0001} perfect cleavage. This mineral has a metallic luster with the black streak. The fracture of this mineral is uneven. The density of arsenic is 5.7 g/cm3 with a hardness of 3.5 –approximate to a copper penny. It is non-fluorescent and non-magnetic.

It comprises about 1.5 ppm (0.00015%) of the Earth’s crust and is the 53rd most abundant element. It occurs in hydrothermal veins and deposits that contain other arsenic minerals. It may also occur in Co–Ag sulfide veins. It is often associated with minerals such as arsenolite, realgar, orpiment, stibnite, cinnabar, galena, pyrite, sphalerite, and barite.

Minerals with the formula MAsS and MAs2 (M = Fe, Ni, Co) are the dominant commercial sources, together with realgar (an arsenic sulfide mineral) and native arsenic. An illustrative mineral is an arsenopyrite (FeAsS), which is structurally related to iron pyrite. Many minor As-containing minerals are known. It also occurs in various organic forms in the environment.

In 2014, China was the top producer of white arsenic with almost 70% world share, followed by Morocco, Russia, and Belgium, according to the British Geological Survey and the United States Geological Survey. Most arsenic refinement operations in the US and Europe have closed over environmental concerns. Arsenic is found in the smelter dust from copper, gold, and lead smelters, and is recovered primarily from copper refinement dust.