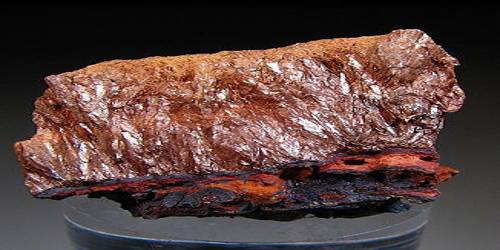 It was named for the composition of arsenic and iron after the Greek word for “iron,” sideros. Arseniosiderite is an uncommon mineral that forms a secondary mineral via the oxidization of early arsenic minerals, usually scorodite and/or arsenopyrite. Arseniosiderite can be identified in the field by its color variations, such as bronze-brown, yellow, yellow-brown, dark brown, and black. Its translucent to opaque form has {100} good cleavage. This mineral has a sub-metallic luster, with the ochraceous streak.

The density of arseniosiderite is 3.5 to 3.9 g/cm3 with a hardness of 1.5 – between talc and gypsum. It is non-fluorescent.

Arseniosiderite occurs as a rare secondary mineral, formed by the oxidation of earlier arsenic-bearing minerals such as scorodite or arsenopyrite.

It occurs in association with beudantite, carminite, dussertite, pharmacolite, pesticide, adamite, and erythrite. The name arseniosiderite reflects two major elements of the mineral, arsenic, and iron.