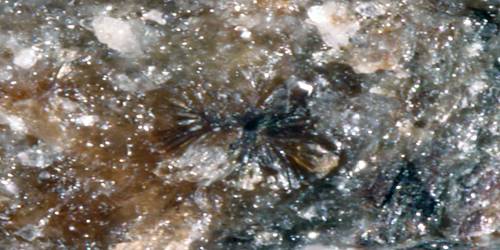 Arsenoclasite (originally arsenoklasite) is a red or dark orange-brown mineral with formula Mn5(AsO4)2(OH)4. It is a mineral consisting of a basic manganese arsenate. It is containing arsenic, hydrogen, manganese, and oxygen. It is not radioactive. The mineral was discovered in 1931 in Långban, Sweden.

A 1971 study identified the mineral’s structure as an array of oxygen atoms in a double hexagonal close-packed pattern. However, a 1977 study discovered that all the manganese ions in arsenoclasite are six-coordinated, a constraint this structure cannot permit without severe distortion.

Arsenoclasite was noted from specimens at Långban, Värmland, Sweden, by Gust Flink in 1924 as a mineral that appeared similar to sarkinite, but with one perfect cleavage. Arsenoclasite was discovered in Långban and officially identified by G. Aminoff in 1931 under the name arsenoklasite. The samples observed by Aminoff did not occur as crystals. Arsenoclasite is red or dark orange-brown in color. The mineral rarely occurs as crystals; rather it has either a massive or granular habit. When crystals are present, they are no larger than 5 millimeters (0.20 in).