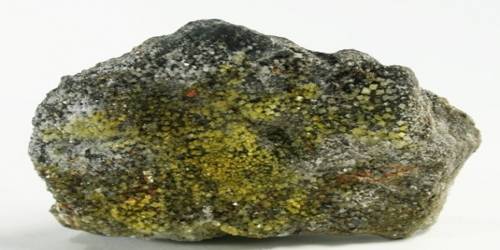 Arsenolite is an arsenic mineral, chemical formula As4O6. It is formed as an oxidation product of arsenic sulfides. It is an uncommon mineral that occurs as a product of the oxidization of arsenic-bearing sulfides in hydrothermal veins and can be formed during mine fires and in burning coal seams and can be found in association with claudetite, realgar, orpiment, erythrite.

Arsenolite is an arsenic mineral that was first described in 1854 for an occurrence in the St. Andreasberg District of the Harz Mountains, Lower Saxony in Germany. The mineral was named after the presence of arsenic in its composition.

Arsenolite belongs to the minerals which are highly toxic.

Localities include in Germany, the Czech Republic, France, England, Greece, Italy, the United States, Canada, among others. Commonly found as small octahedra it is white, but impurities of realgar or orpiment may give it a pink or yellow hue. It can be associated with its dimorph claudetite (a monoclinic form of As2O3) as well as realgar (As4S4), orpiment (As2S3) and erythrite, Co3(AsO)2·8H2O. It develops conchoidal fractures in brittle materials that are characterized by smooth surfaces. It can be formed as crust-like aggregates on matrix. It has a transparent to translucent appearance, vitreous luster, non-magnetic characteristic, white streak and perfect cleavage. The mineral has a density of 3.7 g/cm3, and a hardness of 1.5.

It is closely associated with erythrite, orpiment, realgar, and claudetite.