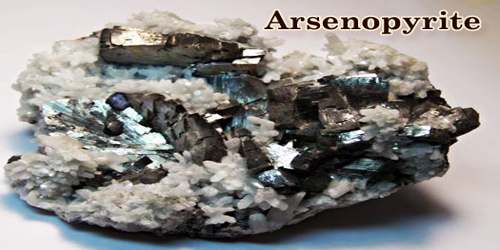 ‘Arsenopyrite’, also called Mispickel, is an iron arsenic sulfide mineral with a chemical composition of FeAsS. It is a hard (Mohs 5.5-6) metallic, opaque, steel grey to silver white mineral with a relatively high specific gravity of 6.1. When dissolved in nitric acid, it releases elemental sulfur. When arsenopyrite is heated, it produces poisonous sulfur and arsenic fumes which can be fatal if inhaled in large quantities. With 46% arsenic content, arsenopyrite, along with orpiment, is a principal ore of arsenic. When deposits of arsenopyrite become exposed to the atmosphere, the mineral will slowly oxidize, converting the arsenopyrite into an iron arsenate, a relatively stable compound. Arsenopyrite is generally an acid consuming sulfide mineral unlike iron pyrite which can lead to acid mine drainage.

The name “arsenopyrite” is a contraction of “arsenical pyrites,” an archaic name used for the mineral. “Mispickel” is another name for arsenopyrite.

Arsenopyrite is most commonly found in ore veins that were formed at high temperatures, as at Mapimí, Mex.; Butte, Mont.; and Tunaberg, Swed. Arsenopyrite forms monoclinic or triclinic crystals with an orthorhombic shape; the physical appearance of these crystals is seldom an accurate method for determining their symmetry. A series of minerals in which cobalt partially replaces iron is called cobaltian arsenopyrites; those in which the Co:Fe ratio lies between 1:2 and 6:1 are called glaucodot. Weathering alters these sulfides to arsenates: arsenopyrite to scorodite, and glaucodot to erythrite.

However, Arsenopyrite usually occurs in such small amounts and in such small particle sizes that it is easily overlooked. It is associated with other sulfide minerals in organic-rich sedimentary rocks, metamorphic rocks, and igneous rocks in many parts of the world.

The crystal habit, hardness, density, and garlic odor when struck are diagnostic. Arsenopyrite in older literature may be referred to as mispickel, a name of German origin. Arsenopyrite also can be associated with significant amounts of gold. Consequently, it serves as an indicator of gold bearing reefs. Many arsenopyrite gold ores are refractory, i.e. the gold is not easily cyanide leached from the mineral matrix. It is found in high temperature hydrothermal veins, in pegmatites, and in areas of contact metamorphism or metasomatism. 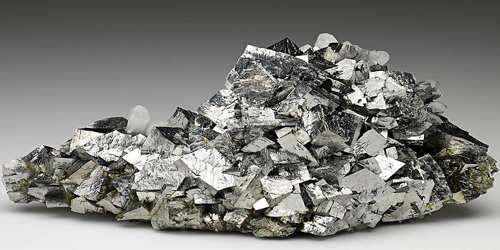 Occurrence and Properties of Arsenopyrite –

Arsenopyrite is a light steel gray or tin white mineral having a black streak, metallic luster, opaque appearance, and non-fluorescent characteristic. Arsenopyrite exhibits distinct cleavage and brittle fractures as displayed by glasses and most non-metallic minerals. The mineral can be formed as prismatic or euhedral crystals. The density of arsenopyrite is 6.07 g/cm3, and its hardness is 5.

Much of the arsenopyrite that has been mined formed as a high-temperature mineral in hydrothermal veins. It is often mined, together with other metallic minerals, from veins that might contain gold, silver, lead, tungsten, or tin. In these deposits arsenopyrite usually occurs in a granular massive form. It is often intergrown with other sulfide minerals such as chalcopyrite, galena, pyrrhotite, pyrite, and sphalerite; precious metals such as gold and silver; or other minerals such as scheelite, cassiterite, and quartz.

Arsenopyrite is distributed in the following places:

In some deposits, cobalt will substitute for some of the iron in the arsenopyrite crystal structure. This produces a solid solution series between arsenopyrite (FeAsS) and glaucodot ((Co,Fe)AsS).

Arsenopyrite crystallizes in the monoclinic crystal system and often shows prismatic crystal or columnar forms with striations and twinning common. Arsenopyrite may be referred to in older references as orthorhombic, but it has been shown to be monoclinic. In terms of its atomic structure, each Fe center is linked to three As atoms and three S atoms. The material can be described as Fe3+ with the diatomic trianion AsS3−. The connectivity of the atoms is more similar to that in marcasite than pyrite. The ion description is imperfect because the material is semiconducting and the Fe-As and Fe-S bonds are highly covalent.

The “invisible gold” occurs in two forms: 1) tiny particles of elemental gold; and, 2) gold that is chemically bound within the arsenopyrite. Elemental gold exposed by crushing can be removed with the cyanide. The chemically bound gold is more difficult to remove without smelting.

Arsenopyrite is the most abundant and widespread of the arsenic minerals and has thousands of worldwide localities, some of which have large and/or fine crystals and include Germany, Serbia, Portugal, Sweden, Greece, England, the United States, Mexico, Canada, Japan, and many others. Most commonly found in medium to high temperature veins. Common in metamorphic deposits, sparse in pegmatites.

Arsenopyrite is the primary ore of arsenic metal, which is used to produce alloys. It was historically used to harden lead in ammunition, but this use has declined in the past few decades. Much arsenic is recovered by smelting in the form of arsenious oxide. This is used to produce a variety of insecticides, herbicides, pesticides, and chemical weapons. Arsenic compounds are also used in medicines, as pigments in paints, and to produce color in fireworks and glass.