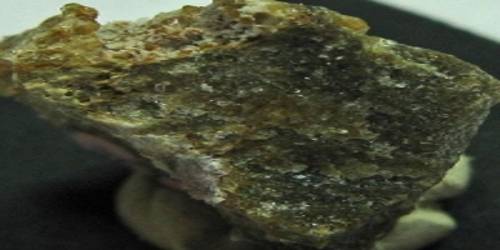 Ashoverite is one of three polymorphs of zinc hydroxide, Zn(OH)2. It is a rare mineral first found in a limestone quarry near Ashover, Derbyshire, England, in 1988. It has also been found in the Harz mountain range in Germany, and in Namibia.

The mineral was discovered after samples of the polymorph sweetite were sent to labs by S. A. Rust. Some specimens contained what appeared to be baryte but, which on further examination, were found to be a previously undescribed mineral. Some of the specimens from Milltown show clusters of platy colorless crystals which were thought originally to be baryte until their X-ray powder diffraction pattern was examined and could not be matched with any known mineral or inorganic compound. These crystals have proved to be a further tetragonal polymorph of Zn(OH)2; sufficient material was available to enable the mineral to be characterized fully. T