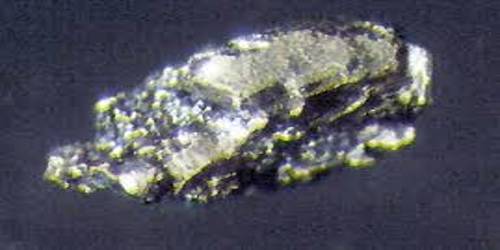 Atheneite is a rare palladium, mercury arsenide mineral with formula (Pd, Hg)3As associated with palladium-gold deposits. It is not radioactive. It was named after the Greek goddess Pallas Athene, in allusion to its palladium content. Atheneite has a metallic luster and its color ranges from white/gray to blue/gray tint. Its Mohs hardness scale is 4.5-5. The Vickers hardness test puts this mineral at a 48. Atheneite also has a specific gravity of 10.2. When placed in a reflected light, it gives off a white light with a yellowish hue and shows very weak reflectance pleochroism in oil (Fleischer, 1974).

It was discovered in 1974 by A.M. Clark, A.J. Criddle, and E.E. Fejer in the Minas Gerais mine in the town of Itabira, Brazil (Clark, 1974). Atheneite was also found in 1982 during a major gold rush at Serra Pelada in northern Brazil. Since then it has been found in the northern region of Para, Brazil, the northern region of Russia, and the Limpopo province of South Africa (Cabral, 2002; Trabaev, 1995). Its name is derived from the Greek goddess Pallas Athena for its association with palladium-gold deposits. It was first found in concentrates from gold washings in Brazil with intergrowths of arsenopalladinite (Fleischer, 1974).