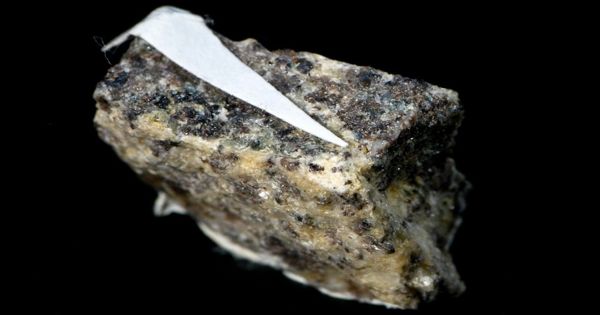 Auricupride is a natural alloy that combines copper and gold. Its chemical formula is Cu3Au. It is named after its chemical composition, being a natural alloy of Gold and Copper. The coexistence of Au and Pt is highly uncommon and has not been observed in other species.

It’s a mineral that was first described in 1950. A variant called tetra-auricupride (CuAu) exists. Silver may be present resulting in the variety argentocuproauride (Cu3(Au,Ag)).

Auricupride is a natural alloy of copper and gold, found as a cubic reddish-yellow mineral. The alloy crystallizes in the cubic crystal system in the L12 structure type and occurs as malleable grains or platey masses. It is an opaque yellow with a reddish tint. It has a hardness of 3.5 and a specific gravity of 11.5.

It was first described in 1950 for an occurrence in the Ural Mountains Russia. It occurs as low temperature unmixing product in serpentinites and as reduction “halos” in redbed deposits. It is most often found in Chile, Argentina, Tasmania, Russia, Cyprus, Switzerland and South Africa.

At its Russian localities, Auricupride occurs “in serpentinites as a product of low-temperature ordering and [separation] of Au-Cu solid solution alloys,” and at a Swiss locality it can be found in reduction halos in red beds.