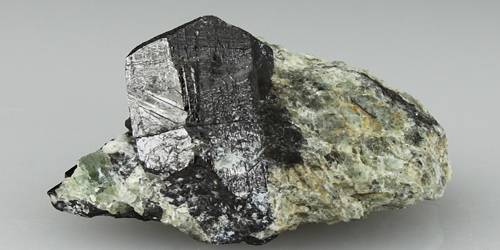 Baddeleyite is a rare zirconium oxide mineral (ZrO2 or zirconia), occurring in a variety of monoclinic prismatic crystal forms. It is transparent to translucent, has high indices of refraction, and ranges from colorless to yellow, green, and dark brown. It is not radioactive.

It was named for Joseph Baddeley. The mineral was discovered in Rakwana, Ceylon, now known as Sri Lanka. Baddeley was a superintendent of a railroad project in Rakwana. As redacted by J. J. H. Teall, Director of the British Geological Survey in the early 1900s, Baddeleyite has discovered thanks to the discovery of Geikielite.

Baddeleyite is a refractory mineral, with a melting point of 2700°C. Hafnium is a substituting impurity and may be present in quantities ranging from 0.1 to several percents. Baddeleyite is black in color with a submetallic luster. It has a 6.5 hardness, and a brownish-white streak. Baddeleyite can also be brown, brownish black, green, and greenish brown. Its streak is white, or brownish white. It has a distinct cleavage along {001} and tends to twin along (100). It belongs to the monoclinic system and is part of the P21/c group.

Baddeleyite was first found in Sri Lanka in 1892. It can be found in numerous terrestrial and lunar rocks. Some of these terrestrial rocks are carbonatite, kimberlite, alkaline syenite, some rocks of layered mafic intrusions, diabase dikes, gabbroid sills, and anorthosite. Some examples of lunar rocks are tektites, meteorites, and lunar basalt.

It can be found in igneous rocks containing potassium feldspar and plagioclase. Baddeleyite is commonly not found with zircon (ZrSiO4), because it forms in silica-undersaturated rocks, such as mafic rocks. This is because, when silica is free in the system (silica-saturated/oversaturated), zircon is the dominating phase, not baddeleyite. It belongs to the monoclinic-prismatic class, of the P21/c crystal system. It has been used for geochronology.