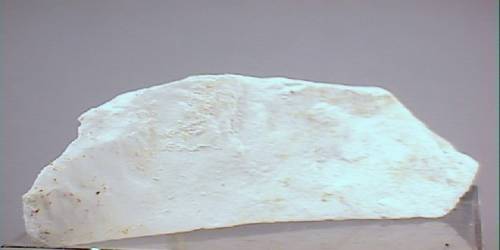 Bakerite is a rare boro-silicate that was discovered in Death Valley, California and is still only found in abundance there. It is the common name given to hydrated calcium boro-silicate hydroxide, a borosilicate mineral (chemical formula Ca4B4(BO4)(SiO4)3(OH)3·(H2O) that occurs in volcanic rocks in the Baker, California area. Discredited mineral: IMA2016-A.

It was first described in 1903 for an occurrence in the Corkscrew Canyon Mine of the Black Mountains, Furnace Creek District, Death Valley National Park, Inyo County, California, US. It was named for Richard C. Baker, a director of the Pacific Coast Borax Company. It is a variety of the mineral datolite occurring in white fine-grained masses resembling marble, containing boron in place of some of the silicon.

It is found therein altered volcanic rocks as nodules and veins. Datolite and howlite a couple of other boro-silicates form similar looking nodules, but datolite is harder and howlite is softer. Massive magnesite can also be confused with bakerite, but it has good cleavage. At another California locality, crystals and crusts of bakerite are found lining cavities in shale with crystals of celestite. The bakerite crystals are clearly monoclinic with a slanted prismatic form.