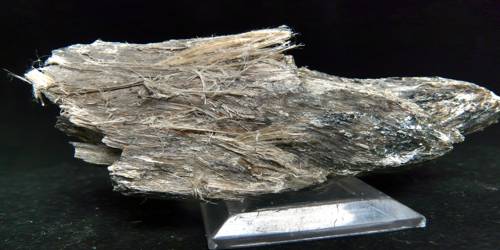 Balangeroite is found in one of the most important chrysotile mines in Europe, the Balangero Serpentinite. Hence, it is usually mistaken as an asbestiform in an assemblage of other mineral phases like chrysotile, magnetite and Fe-Ni alloys. However, Balangeroite does not lead to serious health problems caused by asbestos fibers. Balangeroite was named after the Balangero mine in Piedmont, Italy. Balangeroite can be identified in the field by its color variations, such as brownish-yellow, and dark brown. Its subtranslucent to opaque form has very good cleavage. This mineral has a vitreous-greasy luster, with the brownish-white streak.

Recent publications by Turci have drawn some conclusions that balangeroite was not asbestos, had poor eco persistence and biopersistence. This study also pointed out that it was the obvious chrysotile exposures there, not balangeroite, that caused the incidence of mesotheliomas.

The Piemonte zone, a remnant of the Piemontese Ocean from the Late Jurassic, is home to the majority of the serpentines of the Western Alps. The Balangero mine is located in the Lanzu Ultramafic Massif which is in the inner part of the Piemonte zone. The Lanzu Ultramafic Massif is believed to have been involved in the subduction processes that were affiliated with the closure of the Piemontese Ocean in the late Jurassic. The earliest generation of metamorphic veins and in particular type 1 Vein that constitute relict prismatic balangeroite (often includes antigorite flakes) were formed during prograde high-pressure metamorphism. Fibrous balangeroite is limited to the serpentine-infested rim of the northern Lanzu Ultramafic Massif, with its abundance in the inactive Balangero asbestos mine, where it was discovered.