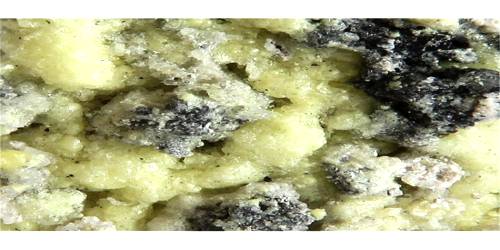 Bararite is named after Barari, a locality in India. This was where the species was first completely described. Earlier, bararite was recognized as part of mixtures with cryptohalite. However, it did not receive its own name until 1951. The East Indian Coal Company provided the sample that Christie used to evaluate bararite. Bararite forms tabular crystals. They are flattened, sometimes elongated, on {0001} (perpendicular to c). Christie reported tiny, transparent crystals of bararite that looked like paddlewheels and darts. Each had four barbs at 90°. The crystals reached up to 1 mm long, the barbs up to 0.2 mm wide. They were interpenetration twins, the twin axis perpendicular to the c-axis. Visually, cryptohalite crystals are almost impossible to discern from sal ammoniac (NH4Cl). Inclusions of bararite in cryptohalite can be seen only with plane-polarized light.

Bararite has about a 6% greater density than cryptohalite. As discussed before, its structure is more packed. This substance can be produced easily from aqueous solution, but only below 5 °C (41 °F) will pure bararite form. Above 13 °C (55 °F), almost pure cryptohalite emerges. Bararite sublimes without leaving a residue.

In nature, bararite appears with cryptohalite, sal ammoniac, and native sulfur. It is found over a burning coal seam in Barari, India, and as a sublimation product in Vesuvius, Italy, at fumaroles (opening in or near a volcano where hot sulfurous gases come out). It also is found in the United States, in Pennsylvania. It appears in burning piles of anthracite (highest grade of coal)—again as a sublimation product.