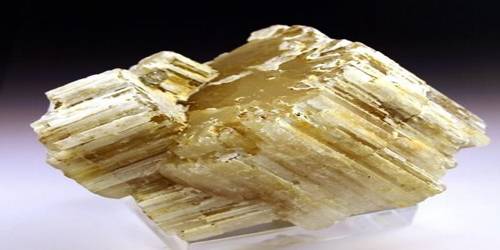 Beryllonite is a rare sodium beryllium phosphate mineral with formula NaBePO4. It is a rare mineral that occurs as a secondary mineral in granitic and alkalic pegmatites. It is named because of its beryllium content. It was discovered by James Dwight Dana in 1888.

The tabular to prismatic monoclinic crystals vary from colorless to white or pale yellowish and are transparent with a vitreous luster. Twinning is common and occurs in several forms. It exhibits perfect cleavage in one direction. The hardness is 5.5 to 6 and the specific gravity is 2.8. It occurs as a secondary beryllium mineral in granitic and alkalic pegmatites. It was first described from complex crystals and as broken fragments in the disintegrated material of a granitic vein at Stoneham, Oxford County, Maine where it is associated with feldspar, smoky quartz, beryl, and columbite. It was discovered by James Dwight Dana in 1888 and named beryllonite for its beryllium content.