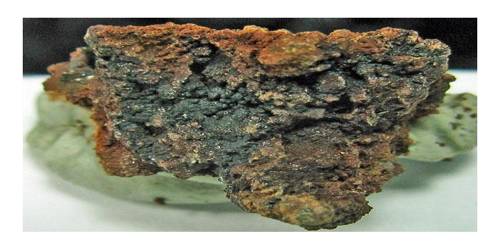 Birnessite (Na0.3Ca0.1K0.1)(Mn4+, Mn3+)2O4·1.5 H2O is an oxide mineral of manganese along with calcium, potassium, and sodium. The mineral was first described in 1956 from the Birness, Aberdeenshire, Scotland. It was named after the place of discovery.

It has a dark brown to black color with a submetallic luster. It is also very soft, with a Mohs hardness of 1.5. Birnessite is formed by precipitation in lakes, oceans, and groundwater and is a major component of desert varnish and deep sea manganese nodules.

Birnessite is a dark brown or black mineral having sub-metallic luster and sub-opaque appearance. It can be formed as earthy, dull crystals or massive uniformly undistinguishable crystals. The density of birnessite is 3 g/cm3, and its hardness is 1.5. It was first described in 1956 and named for an occurrence in Birness, Aberdeenshire, Scotland. Birnessite is found as an oxidation product of several other minerals, including rhodonite, rhodochrosite, and as a weathering product of franklinite-willemite ore. It has also been found as a coating along joint planes and fractures within a trachyte sill. However, it has been most commonly seen as a constituent of oceanic nodules of manganese.

Birnessite occurs as a major manganese-bearing mineral of many soils; a common alteration product of manganese-rich mineral deposits; a component of bacterially-precipitated manganese oxides. It can also be formed as an important constituent of “desert varnish” and marine manganese nodules. It is closely associated with calcium carbonate, manganese and iron oxides, cummingtonite, alleghanyite, spessartine, tephroite, rhodochrosite, and rhodonite.