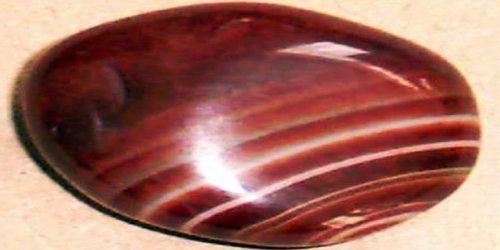 “Sardonyx” is a chalcedony that it colored black, red, brown and white. This cryptocrystalline quartz can be colored with iron and carbon inclusions giving it the brown and black coloring. It is formed hydrothermally in hollows or vugs in rocks. Its name is derived from the Greek words “sard,” meaning a reddish brown, and “onyx,” meaning veined gem.

Some (but not all) birthstone lists include sardonyx as a birthstone for August. Sardonyx is a banded variety of chalcedony that exhibits straight, parallel bands of white, black, orange, red, or brown chalcedony. Some of the most spectacular cabochons and beads are cut from sardonyx. It was a popular mineral for carving cameos, leaving a layer of white onyx on top of the ornament, and carving down into the sard layer for contrast.

The name is a reference to the combination of stones – sard and onyx. Marbodus claims that the fiery brightness of the sard neutralises the dark, morbid thoughts black onyx can produce, rendering the stone neutral, so although beautiful there are no virtues. Contrary to this, and also in the 11th century, Hildegard von Bingen says it is purifying, strengthens understanding and knowledge, banishes wrath and stupidity, calms unwanted lust, and if worn after recovery from an illness, will prevent the wearer from ever suffering from that illness again. She also states that it furnishes strength to the five senses, and can be used as a remedy for each of these senses. In Christian symbolism, in Revelations XXI, sardonyx represents one of the foundation stones of the New Jerusalem, and is assigned by Andreas, Bishop of Caesarea to represent the apostle James.

History of Sardonyx: Sardonyx can be traced back four thousand years to Ancient Egypt. For most of its history, this stone has been used to create cameos and intaglios. In Ancient Rome, women wore sardonyx necklaces with cameos of Venus in hopes of harnessing the power of the goddess of love. It was also common for soldiers to wear sardonyx rings and carvings containing images of Mars, the god of war, into battle as a means of protection. Sardonyx was also a popular stone for Roman seals and signet rings that were used to imprint wax emblems on official documents because hot wax doesn’t stick to this stone.

Sardonyx is an agate whose banding is straight and parallel. Much like agate, it is dyed to enhance or change its colors. Dyeing agate was an art practiced by the Romans from early on, but it reached perfection in the 1820s in Oberstein, Germany. That town is still the world’s center for the finest cutting and dyeing of agate. Although the details of the process remain a commercial secret, it is known that iron oxide is a pigment used to create the rich combination of deep orange-reds in red and white bullseye sardonyx and in the red and white-banded variety. Carbon is used to create the striking deep black banding in black and white banded sardonyx. The effects are stunning ancient agate beads in rich colors perfect for blending with solid colored red or black beads.

Occurrence and Properties of Sardonyx –

The word Sardonyx is derived from the Greek, sard meaning “reddish brown,” and onyx meaning “veined gem.” The best stones are found in India. They are also found in Germany, Czechoslovakia, Brazil, and Uruguay. In the United States, sardonyx can be found in the Lake Superior region and in Oregon. 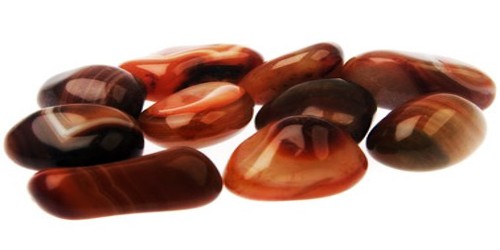 This stone combines alternating layers of sard and onyx; hence its name. Sard appears anywhere from a dark orange to red to almost black. Onyx, although thought by most to only appear in black, can appear in almost any color. These two types of the mineral chalcedony are paired in bands to create sardonyx. Also known as Sardian Onyx, it may be clearly banded or have a less defined mix of colors.

Sardonyx was a favorite gemstone in ancient times, popular not only because it was attractive, but also because it was widely available. Unlike most rare gemstones that could only be bought with the wealth of royalty and nobility, sardonyx could be obtained by many less-wealthy people.

Much of the black and white-banded sardonyx’s power comes from its association with a particular body type slender, quick-moving people who are intellectually active. If we are clever, versatile, and highly verbal and have an optimistic disposition, those traits may be heightened when you wear black and white-banded sardonyx. Or, we can wear it to help us control one of those traits if it’s working against you. Some believe that placing sardonyx at each corner of a house will protect against evil.

Care, Uses and Benefits of Sardonyx –

Clean sardonyx using warm soapy water and a soft brush. Although it has a high hardness, sardonyx can still be scratched or damaged by gemstones with a higher hardness, as well as other materials. Avoid using household chemicals when cleaning sardonyx beads, components or jewelry. This stone can be sensitive to heat, especially dyed stones, and prolonged exposure to sunlight can fade color-enhanced types. Store sardonyx inside a fabric-lined box or wrapped in a soft cloth.

Sardonyx has also been used as a material for cutting cameos. These take advantage of the layered, multicolored nature of the material. Cameos have been popular in jewelry for at least 2000 years. (Cameos are often cut from many other materials, especially shell materials, but many of the finest cameos are cut from sardonyx.)

Sardonyx carries the general qualities of chalcedony, together with the individual properties of sard and onyx. In modern symbolism, sardonyx is believed to bestow courage on its owner and bring balance and happiness into marriage and relationships, so it is often given as a wedding gift. If sardonyx is black and red-brown, it represents neutrality. This color combination is also the most proctective of colors, and is very grounding, as well as being more calming and soothing than the white and red-brown variety. If the color is white and red-brown, it symbolizes purity. This version holds connection with the Crown Chakra and spirit, and seems to link into posture, so one is more “upright” when using or wearing it. When all three of the colors are present, especially if they are equally dispersed, it is symbolic of perfection.

​Sardonyx provides people the stabilization and strength required to have the endurance, energy and fortitude to create good fortune based on good moral ethics. With this grounding stone they will be able to translate their energies into tangible results. This is a good stone for builders, athletes, physical therapists, chiropractors and massage therapists. Keep it nearby to increase business success in these occupations.