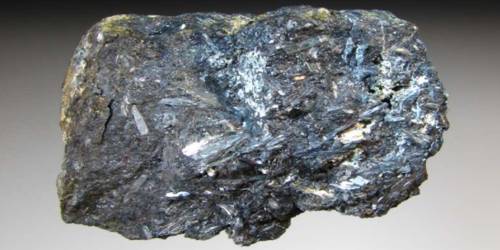 Bismuthinite is a mineral consisting of bismuth sulfide (Bi2S3). It is an uncommon bismuth mineral that forms in interesting crystal habits. It is an important ore for bismuth. The crystals are steel-grey to off-white with a metallic luster. It is soft enough to be scratched with a fingernail and rather dense.

Bismuthinite forms a series with the lead, copper, bismuth mineral aikinite (PbCuBiS3). It is structurally similar to Stibnite, with a similar appearance, but they occur in different environments, and Stibnite can form in much larger and robust crystals. It is named for its bismuth content.

It was first reported in 1832 from the mines of Potosí, Bolivia. Bismuthinite is a relatively common mineral with over one thousand localities including in Bolivia, the United States, Romania, Germany, England, Australia, Madagascar, and Norway.  Found generally in hydrothermal vein deposits of a range of temperature, in tourmaline-bearing copper deposits in granite, high-temperature gold veins, and in volcanic exhalation deposits.