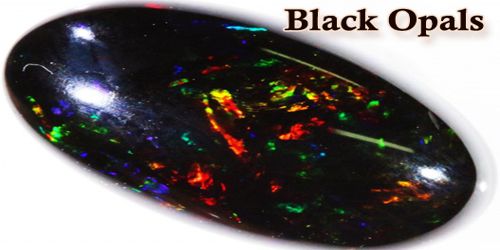 “Black Opal” is one of the rarest gemstones on earth; ‘Opal’ is a hydrated amorphous form of silica (SiO2·nH2O); its water content may range from 3 to 21% by weight but is usually between 6 and 10%. Because of its amorphous character, it is classed as a mineraloid, unlike crystalline forms of silica, which are classed as minerals. It is deposited at a relatively low temperature and may occur in the fissures of almost any kind of rock, being most commonly found with limonite, sandstone, rhyolite, marl, and basalt. Opal is the national gemstone of Australia. Red-colored opal with a harlequin pattern is the rarest of the rare in the opal world.

The opal comes up in history from the time of the Roman Empire. At that time Roman imperial families and generals loved opals very much. This is a very popular story. The story goes like this. One of the famous generals during The Roman Empire “Marcus Antonius (82-30BC)” was going to give a beautiful opal to Cleopatra. But that stone was owned by Nonius (Roman politician) and he denied to sell the stone to Antonius. The conclusion of this story was Antonius got angry with Nonius and banished him out of Rome.

Opal was rare and very valuable in antiquity. In Europe, it was a gem prized by royalty. Until the opening of vast deposits in Australia in the 19th century, the only known source was Červenica beyond the Roman frontier in Slovakia. 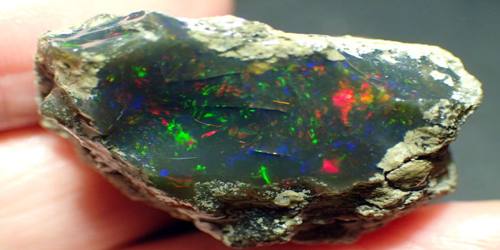 Black Opals are the rarest form of all precious opals and are characterized by their dark body tone and rich colors or ‘fire’. It is 2.46 carats in weight and 9.5 x 12.5 millimeters in size. The other specimen is a black matrix opal cut from material mined at Andamooka, South Australia. It is a cabochon of about 30 carats. Almost all of the world’s black opals are mined in Australia (which also is the world’s largest overall producer of opals, at 90 percent).

There are two broad classes of opal: precious and common. Precious opal displays play-of-color (iridescence), common opal does not. Play-of-color is defined as “a pseudo chromatic optical effect resulting in flashes of colored light from certain minerals, as they are turned in white light.” The internal structure of precious opal causes it to diffract light, resulting in play-of-color. Depending on the conditions in which it formed, opal may be transparent, translucent or opaque and the background color may be white, black or nearly any color of the visual spectrum. ‘Black opal’ is considered to be the rarest, whereas white, gray and green are the most common.

Black Opals are rare, far more rare than diamonds and so many incredible colors that no other gemstone can match the brilliance of color, fire, and pattern of Australian black opals. Lightning Ridge Black opal has been described as a full rainbow of colors that has magnified in splendid color.

The first recorded Black Opal found in Lightning Ridge was in 1873. However, Until 1903, people were not aware of its value. From that time until now, Lightning Ridge is the only place people can find this magnificent gem, “Black Opal.” “Solid” opal refers to polished stones consisting wholly of precious opal. Opals too thin to produce a “solid” may be combined with other materials to form attractive gems. An opal doublet consists of a relatively thin layer of precious opal, backed by a layer of dark-colored material, most commonly ironstone, dark or black common opal (potch), onyx, or obsidian.

Besides the gemstone varieties that show a play of color, the other kinds of common opal include the milk opal, milky bluish to greenish (which can sometimes be of gemstone quality); resin opal, which is honey-yellow with a resinous luster; wood opal, which is caused by the replacement of the organic material in wood with opal; menilite, which is brown or grey; hyalite, a colorless glass-clear opal sometimes called Muller’s glass; geyserite, also called siliceous sinter, deposited around hot springs or geysers; and diatomaceous earth, the accumulations of diatom shells or tests. Common opal often displays a hazy-milky-turbid sheen from within the stone. In gemology, this optical effect is strictly defined as opalescence which is a form of adularescence.

Many people say “Opal is too soft to wear” or “I don’t like opal because it’s easy to scratch”. Compare with diamonds, opal has less hardness. The opal’s hardness is measured at 6.0 to 6.5 on the Moh’s scale, it’s similar in hardness to emerald or quartz (as you know the diamond is 10 in Moh’s scale). But you have to remember that even diamonds can be scratched or break. Opal is not strong against scratches but are more stronger or resistant against pressure than emeralds. We sometimes hear people saying that opals have to be put into water for treatment. This is wrong!! Opals are combined with water and it contains some water in it. Mexican opal contains around 12% of the opals volume. The Black and Boulder opal contains less water than the Mexican opal (around 6%), so these types of opals are less likely to dry out.

Even as recently as the beginning of the 20th century, it was believed that when a Russian saw an opal among other goods offered for sale, he or she should not buy anything more, as the opal was believed to embody the evil eye. “Opal” is considered the birthstone for people born in October. In ancient times, Opals was recognized as a symbol of faithfulness and confidence. The brilliant colored opal was said to have magic powers because of its play of color. It was known to strengthen eyesight, protect against contagious diseases, ease sadness and turn pale in the presence of poison. Opal symbolizes magic, love, hope, happiness, and truth.