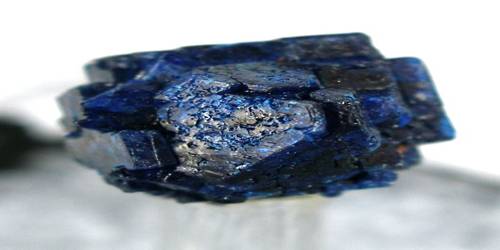 Boleite is a complex halide mineral with formula: KPb26Ag9Cu24(OH)48Cl62. It was first described in 1891 as an oxychloride mineral. It was named for its type locality at Boleo, Baja California, Mexico. It is an isometric mineral which forms in deep-blue cubes. It is a highly attractive, though uncommon, a blue mineral that forms in very distinct crystal habits. Its crystals can be perfectly cubic, both in individual isolated crystals, and may be perched on fragile matrix.

Boleite is uncommon to a rare secondary mineral that forms via the reaction between chloride with sulfides in oxidized lead-copper deposits. There are numerous minerals related to boleite, such as pseudoboleite, cumengite, and diaboleite, and these all have the same complex crystal structure. They all contain bright-blue cubic forms and are formed in altered zones of lead and copper deposits, produced during the reaction of chloride-bearing solutions with primary sulfide minerals. The external property of a boleite crystal structure indicates its cubic structure. It is classified under the isometric crystal class. Twinning is best shown in this mineral by notches along the interpenetrated angles, which results in a crystal habit of pseudocubic penetration twinning along three different angles perpendicular to one another. Boleite has cubes over half an inch on each side, which consists of pseudo-octahedral tetragonal dipyramids.

Boleite was first collected as a minor ore of silver, copper and lead at Boleo, Mexico. Boleite was named after its place of discovery, El Boleo mine, on the Baja Peninsula, near Santa Rosalia, Mexico.