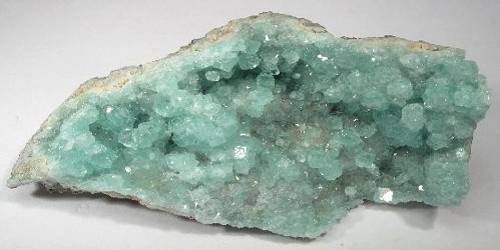 Boracite is a magnesium borate mineral with formula: Mg3B7O13Cl. It occurs as blue-green, colorless, gray, and yellow to white crystals in the orthorhombic – pyramidal crystal system. Boracite also shows pseudo-isometric cubical and octahedral forms. It has good color, clarity, and hardness to be a gemstone and yet it is rarely cut for this purpose. Probably because it is slightly soluble in water and ordinary wear dulls its surface. It is an attractive mineral for mineral specimens though. Localities for Boracite including in Germany, France, England, Kazakhstan, Bolivia, the United States, and Canada, among only a few others. Minerals associated with Boracite include anhydrite, gypsum, halite, sylvite, carnallite, kainite, and hilgardite.

Boracite is typically found in evaporite sequences associated with gypsum, anhydrite, halite, sylvite, carnallite, kainite and hilgardite. It was first described in 1789 for specimens from its type locality of Kalkberg hill, Lüneburg, Lower Saxony, Germany. The name is derived from its boron content (19 to 20% boron by mass).