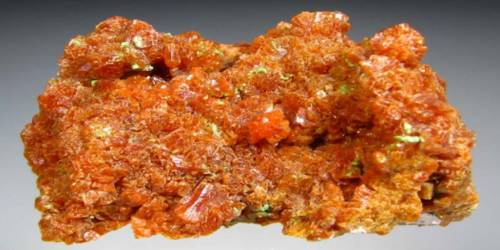 Botryogen is a hydrous magnesium sulfate mineral with formula: MgFe3+(SO4)2(OH)·7H2O. It is also known as quetenite. It was first described in 1828 for an occurrence in the Falu mine of Falun, Dalarna, Sweden. It was named for its grape-like appearance from Greek botrys for a bunch of grapes and genos to bear.

It generally used in the treatment of the fleshy organs of the body. It can help to stimulate circulation and to relieve mental instability. It is also helpful for an elimination of undesirable residue from the area of the intestines. It has been used during pregnancy to ease the expansion of skin and to facilitate ease in the birthing process. Botryogen, when placed on the stomach, has produced both calming for the unborn child and rectification of digestive disorders. It crystallizes in the monoclinic prismatic system and typically occurs as vitreous bright yellow to red botryoidal to reniform masses and radiating crystal prisms. Its specific gravity is 2 to 2.1 and its Mohs hardness is 2.