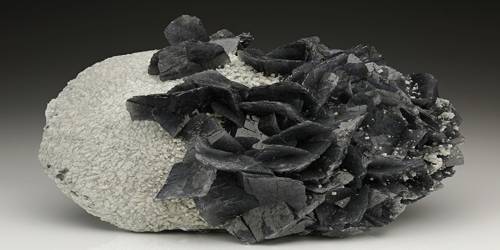 Boulangerite is a sulfosalt mineral, lead antimony sulfide, formula Pb5Sb4S11. It is one of a few sulfide minerals that form fine acicular crystals that appear as hair-like fibers. It is a sulfosalt, a segment of sulfides where the antimony acts more like a metal than a non-metal and occupies a position where it is bonded to sulfurs.

It was named in 1837 in honor of French mining engineer Charles Boulanger (1810–1849). It forms metallic grey orthorhombic crystals. Sometimes the crystals form a fine feathery mass which has been called plumosite. Boulangerite is used as a lead ore. Boulangerite is relatively common and widespread and can be found in medium to high-temperature hydrothermal veins. Some of the many localities including in France, Italy, Sweden, Germany, Serbia, the Czech Republic, the United States, Mexico, and Canada. Minerals associated with Boulangerite include lead sulfosalts, Galena, stibnite, sphalerite, pyrite, arsenopyrite, siderite, and quartz. Sometimes easily confused with jamesonite.