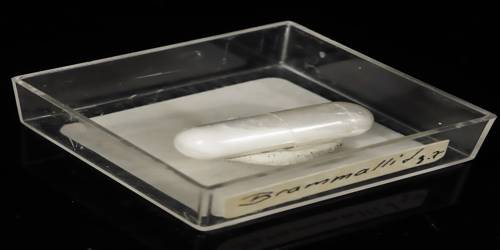 Brammallite is a sodium-rich analog of illite, formula: (Na, H3O)(Al, Mg, Fe)2(Si, Al)4O10 [(OH)2·(H2O)]. The mineral is a sodium-rich illite mica and has subsequently been redefined as a mineral series. First described in 1943 as an occurrence in Llandybie, Carmarthenshire, Wales, it was named after British geologist and mineralogist Alfred Brammall (1879–1954).

Believed to be a degradation product of paragonite, like illite it is a non-expanding, clay-sized, micaceous mineral. Brammallite is a phyllosilicate or layered silicate. Structurally, brammallite is quite similar to muscovite or sericite with slightly more silicon, magnesium, iron, and water and slightly less tetrahedral aluminum and interlayer potassium. Only one occurrence of brammallite in Wales, other than that from the type locality noted above, is cited in the literature. As the mineral is fine-grained, and can only be identified optically or by X-ray diffraction, it is quite possible that it has a far wider distribution than is currently documented.