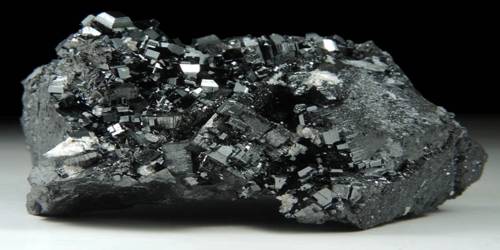 Braunite is a silicate mineral containing both di- and tri-valent manganese with the chemical formula: Mn2+Mn3+6[O8|SiO4]. It was named after Wilhelm von Braun, an Advisor of the Chambers, in Gotha, Germany. He was also a supporter of geology and mineralogy and provided the original material for the description of braunite. Common impurities include iron, calcium, boron, barium, titanium, aluminum, and magnesium. Braunite can be identified in the field by its color variations between grayish black, brownish gray, and dark brownish black. Its opaque form has {111} perfect cleavage. This mineral has a sub-metallic luster with a brownish gray-black streak. The fracture of this mineral is brittle. The density of braunite is 4.72 – 4.82 g/cm3 with a hardness of 6-6.5 – between that of orthoclase and pyrite.

Braunite occurs by metamorphism of manganese silicates and oxides, and also as a product of weathering. It is often associated with minerals such as pyrolusite, hausmannite, bixbyite, rhodonite, jacobsite, spessartine, and hematite.