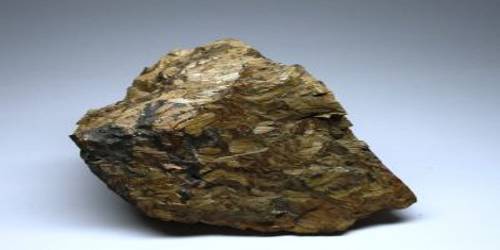 Bronzite is a member of the pyroxene group of minerals, belonging to enstatite and hypersthene to the orthorhombic series of the group. Rather than a distinct species, it is really a ferriferous variety of enstatite, which owing to partial alteration has acquired a bronze-like sub-metallic luster on the cleavage surfaces. The cleavage surfaces, therefore, exhibit a metallic sheen or schiller, which is even more pronounced in hypersthene than in bronzite. The color of bronzite is green or brown; its specific gravity is about 3.3–3.4, varying the amount of iron present. The refractive indices and optic angle increase with iron content. The enstatite endmember has a positive optic sign, whereas bronzite and hypersthene both show a negative optic sign.

Enstatite is magnesium silicate, MgSiO3, with the magnesium partly replaced by small amounts (up to about 12%) of Fe2+. In the bronzite variety, (Mg, Fe)SiO3, the iron(II) oxide ranges from about 12 to 30%, and with still more iron there is a passage to hypersthene. The ferriferous varieties are liable to a particular kind of alteration, known as schillerization, which results in the separation of the iron as very fine films of oxide and hydroxides along the cleavage cracks of the mineral.

Like enstatite, bronzite is a constituent of many mafic to ultramafic igneous rocks, such as, norite, gabbro, and especially peridotite, and of the serpentinites which have been derived from them. It also occurs in some crystalline schist. Bronzite, a pyroxenite of bronzite composition, is noted in the cumulate rocks of the Stillwater igneous complex of Montana.