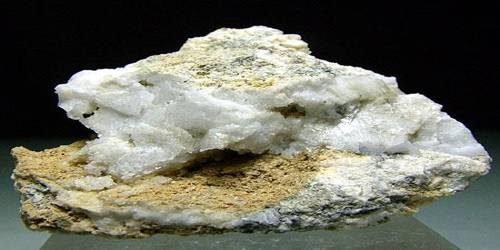 Brushite is a phosphate mineral with the chemical formula CaHPO4·2H2O. It was named after Professor George Jarvis Brush (1831–1912), an American mineralogist associated with Yale University in New Haven, Connecticut, USA. It forms colorless to pale yellow monoclinic prismatic crystals and as powdery or earthy masses. It is the phosphate analogue of the arsenate pharmacolite and the sulfate gypsum. Brushite can be identified in the field by its color variations, such as yellow, yellowish white, and white. It is sometimes colorless. Its transparent to translucent form has {010} perfect and {001} perfect cleavage. This mineral has a vitreous – pearly luster with a white streak. The density of brushite is 2.328 g/cm3, with a hardness of 2.5 – approximate to a fingernail.

Brushite is one of the most common cave minerals. It occurs in guano deposits, and in phosphorites that are formed at low pH by reaction of phosphate-rich solutions with calcite and clay.

It is often associated with minerals such as tanarakite, variscite, ardealite, hydroxylapatite, and gypsum. It is believed to be a precursor of apatite and is found in guano-rich caves, formed by the interaction of guano with calcite and clay at a low pH. It occurs in phosphorite deposits and forms encrustations on old bones. It may result from runoff of fields which have received heavy fertilizer applications. Associated minerals include tanarakite, ardealite, hydroxylapatite, variscite, and gypsum.