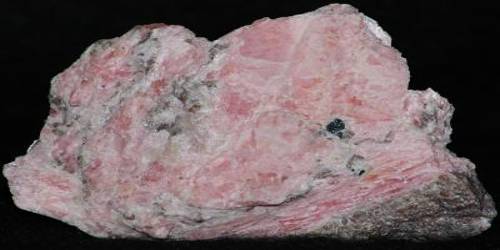 Bustamite is a calcium manganese inosilicate (chain silicate) and a member of the wollastonite group. It was named after General Anastasio Bustamente (1780-1853), of Mexico. Magnesium, zinc, and iron are common impurities substituting for manganese. Bustamite is the high-temperature polymorph of CaMn2+Si2O6 and johannsenite is the low-temperature polymorph. The inversion takes place at 830 °C (1,530 °F) but may be very slow.

Bustamite could be confused with light-colored rhodonite or pyroxmangite, but both these minerals are biaxial (+) whereas bustamite is biaxial (-). Bustamite can be identified in the field by its color variations, such as brown-red, light pink, and pink. Its transparent to translucent form has {100} perfect, {110} good and {110} good cleavage. This mineral has a vitreous luster, with a white streak.

Bustamite occurs in manganese ores, formed by the metamorphism of manganese-bearing sediments with attendant metasomatism; it is typically associated with skarns.

It is often associated with minerals such as rhodonite, tephroite, glaucochroite, johannsenite, wollastonite, diopside, grossular, and calcite.

The type locality was originally taken as Tetela de Jonotla, Puebla, Mexico, and the mineral was named for General Anastasio Bustamante (1780–1853), three times President of Mexico. The material from Puebla, however, was later found to be a mixture of johannsenite and rhodonite, so the type locality is now the Franklin Mine, Franklin, Sussex County, New Jersey, US.

Bustamite typically results from metamorphism of manganese-bearing sediments, with attendant metasomatism. At the (new) type locality, Franklin, the oldest rocks are Precambrian gneisses of mixed sedimentary and volcanic origin. Franklin Marble was deposited within these rocks, along with sediments containing zinc, manganese and iron minerals. These sediments were metamorphosed later in the Precambrian, then the rocks were uplifted from the late Precambrian into the Cambrian and quartzite was deposited on the eroded surface. In Cambrian-Ordovician time the quartzite was in turn overlain by limestone, and the rocks have been subject to uplift and erosion up to the present time.