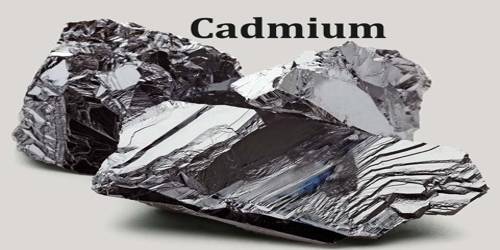 Cadmium is a chemical element with symbol Cd and atomic number 48. It is a soft, bluish-white metal that can be easily cut with a knife. It has similar characteristics to zinc and mercury and it tarnishes when exposed to air. It is soluble in acids but insoluble in alkalis. Cadmium belongs to the d-block, period 5 of the periodic table.

This soft, bluish-white metal is chemically similar to the two other stable metals in group 12, zinc and mercury. Like zinc, it demonstrates oxidation state +2 in most of its compounds, and like mercury, it has a lower melting point than the transition metals in groups 3 through 11. Cadmium and its congeners in group 12 are often not considered transition metals, in that they do not have partly filled d or f electron shells in the elemental or common oxidation states. The average concentration of cadmium in Earth’s crust is between 0.1 and 0.5 parts per million (ppm). It was discovered in 1817 simultaneously by Stromeyer and Hermann, both in Germany, as an impurity in zinc carbonate.

Although cadmium has no known biological function in higher organisms, a cadmium-dependent carbonic anhydrase has been found in marine diatoms. Cadmium is a soft, malleable, ductile, bluish-white bivalent metal. It is similar in many respects to zinc but forms complex compounds. Unlike most other metals, cadmium is resistant to corrosion and is used as a protective plate on other metals. As a bulk metal, cadmium is insoluble in water and is not flammable; however, in its powdered form it may burn and release toxic fumes.

Cadmium makes up about 0.1 ppm of Earth’s crust. It is much rarer than zinc, which makes up about 65 ppm. No significant deposits of cadmium-containing ores are known. The only cadmium mineral of importance, greenockite (CdS), is nearly always associated with sphalerite (ZnS). This association is caused by the geochemical similarity between zinc and cadmium, with no geological process likely to separate them. Thus, cadmium is produced mainly as a byproduct of mining, smelting, and refining sulfidic ores of zinc, and, to a lesser degree, lead and copper. Small amounts of cadmium, about 10% of consumption, are produced from secondary sources, mainly from dust generated by recycling iron and steel scrap. Production in the United States began in 1907, but wide use began after World War I.

Metallic cadmium can be found in the Vilyuy River basin in Siberia.