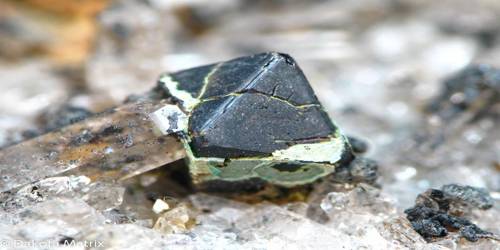 Cafarsite, formula- (Ca8(Ti,Fe2+,Fe3+,Mn)6-7(AsO3)12·4H2O) is a rare calcium iron arsenite mineral. Manganese and titanium occur with iron in the formula. It is the composition of the mineral is its namesake after the calcium (ca), iron (Latin: ferrum), and arsenic (ars) in the mineral’s chemical formula.

It was first described in 1966 for an occurrence in the Binn Valley, Valais, Switzerland. Its name is of the composition, calcium, ferrum (iron), and arsenic. It has also been reported from Piedmont, Italy and the Hemlo gold mine in the Thunder Bay District, Ontario, Canada. On cleft faces in orthogneiss (Cherbadung, Switzerland). Cafarsite is a rare mineral that is found in Switzerland in a few localities in Binn Valley in Wallis, in Italy at Devero Alp in Piedmont, and in Canada at the Hemlo gold deposits in the Thunder Bay district of Ontario. Cafarsite occurs at its type locality at Scherbadung on cleft faces in orthogneiss. Associated minerals at the type locality include asbecasite, gasparite-Ce, chernovite, and synchysite.