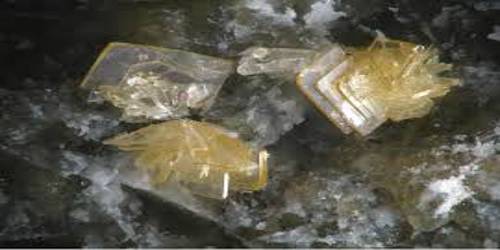 It was first described in 1959 as an occurrence in the Afrikanda Massif, Afrikanda, Kola Peninsula, Murmanskaja Oblast’, Northern Region, Russia. It is also reported from the Khibiny and Kovdor massifs of the Kola Peninsula and from Meagher County, Montana, US. Cafetite can be identified as colorless or pale yellow crystals with good cleavage, white streaks, and adamantine luster. It is transparent in nature. Its fractures appear brittle as shown by glasses and some of the non-metallic minerals. The mineral can be formed as needle-like crystals or aggregates. The relative hardness of cafetite ranges from 4 to 5, and its density is 3.28 g/cm3.