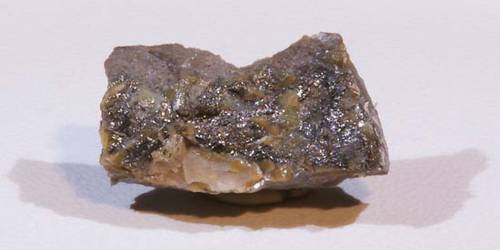 The mineral often has a metallic luster, and its color may range from a silvery white to a brassy yellow. It is closely related to the gold-silver telluride mineral sylvanite, which, however, contains significantly more silver. Another AuTe2 mineral is krennerite. Calaverite and sylvanite represent the major telluride ores of gold, although such ores are minor sources of gold in general. Calaverite can be identified in the field by its color variations such as yellow and yellowish white. Its opaque form has no cleavage. This mineral has a metallic luster with the green streak. The fracture of this mineral is brittle – conchoidal. The density of calaverite is 9.04 g/cm3 with a hardness of 2.5 – approximate to the finger nail. It is non-fluorescent.

Calaverite occurs as monoclinic crystals, which do not possess cleavage planes. It has a specific gravity of 9.35 and a hardness of 2.5. Calaverite can be dissolved in concentrated sulfuric acid. In hot sulfuric acid, the mineral dissolves, leaving a spongy mass of gold in a red solution of tellurium.

Calaverite occurs in veins in low-temperature hydrothermal deposits, but also in medium and high-temperature deposits. It is often associated with minerals such as altaite, krennerite, tennantite, rickardite, arsenopyrite, coloradoite, tetrahedrite, sphalerite, pyrite, stibnite, other sulfides, and other tellurides.