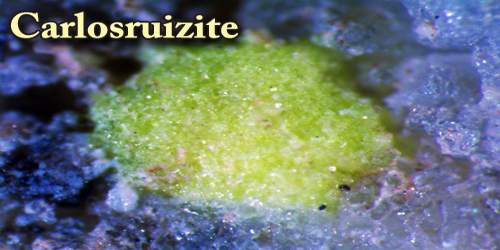 With its pale yellow color, Carlosruizite can be identified in the field. It is a mineral iodate with chemical formula-sulfate or selenate: K6(Na,K)4Na6Mg10(SeO4)12(IO3)12·12H2O. It is sometimes colorless; it has {110} good cleavage in its transparent form. It was first found in the locality of Zapiga, Chile’s Tarapacá region, in 1994. Its name came from Carlos Ruiz Fuller (1916–1997), founder of Geological Research Institute.

The structure is based on two complex slabs, normal to the c axis; each slab consists of a double layer composed of trigonal-pyramidal iodate groups, bounded by layers of (Se,S,Cr)O4 groups at the top and bottom. Carlosruizite (yellow nitrate ore) is found in samples of iquiqueite leached from caliche Amarillo. This mineral has a vitreous luster with a white streak. The fracture is brittle on that mineral. The layers are separated by K+, with Na+ and Mg2+ helding the layer complex together. The structure resembles somewhat that of members of the Alunite group. 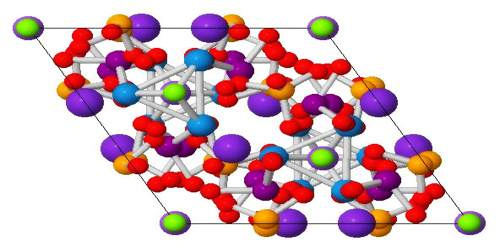 Small amounts (a few tens of milligrams each) of carlosruizite from two localities in the Chilean nitrate fields were first found in nitrate ores. The carlosruizite density is 3.42 g / cm3, with a hardness between the fingernail and calcite of 2.5 to 3. Carlosruizite was found in samples of iquiqueite as ~200 μm of platy crystals, Na4K3Mg(CrO4)B24O39(OH)·12H2O, obtained by leaching caliche Amarillo (yellow nitrate ore) from samples in the Iquique office of the former Servicio de Minas del Estado of Chile, now the National Geology and Mining Service (SERNAGEOMIN).

Carlosruizite is often associated with minerals such as Iquiqueite, nitratine, halite, darapskite, and residues that contain dietzeite, bruggenite, tarapacaite, ulexite, probertite, lopezite, and gypsum after water-leach. It is a trigonal mineral with lattice spacing a=9.59, c=27.56 Å, Z=1z, and V=2,195.11. It has a structure bearing a distant resemblance to those of the alunite group. Carlosruizite was the first minerals of this type together with fuenzalidaite, in which a layer of groups of IO3 occurred.

No information was entered into the database regarding health risks for this material. People should always be wary of treating mineral specimens. Carlosruizite was named in honor of the Chilean geologist and mining engineer Carlos Ruiz Fuller, who played an important role in geological development in Chile in the 20th century, the first national geological institution (inaugurated in 1957) was planned and directed by the Instituto de Investigaciones Geológicas, now the Servicio Nacional de Geología y Minería, which initiated the first systematic geological mapping and study of mineral deposits in Chile.