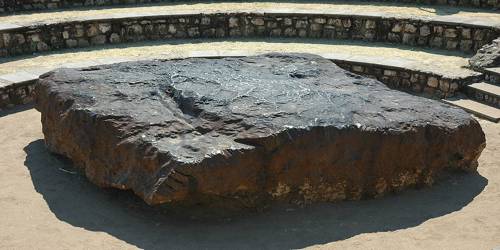 Carlsbergite is a nitride mineral that has the chemical formula CrN, or chromium nitride. It is named after the Carlsberg Foundation which backed the recovery of the Agpalilik fragment of the Cape York meteorite in which the mineral was first described.

It occurs in meteorites along the grain boundaries of kamacite or troilite in the form of tiny plates. It occurs associated with kamacite, taenite, daubreelite, troilite, and sphalerite. Carlsbergite can be identified in the field by its gray color. Its opaque form has a metallic luster. The density of carlsbergite is 5.9 g/cm3 with a hardness of 7 – approximate to quartz.

Carlsbergite occurs as minute platelets and grain boundary precipitates in kamacite and troilite, and as similar grains ringing daubreelite in iron meteorites. It is often associated with minerals such as kamacite, taenite, sphalerite, daubreelite, and troilite.

In addition to the Cape York meteorite, carlsbergite has been reported from: