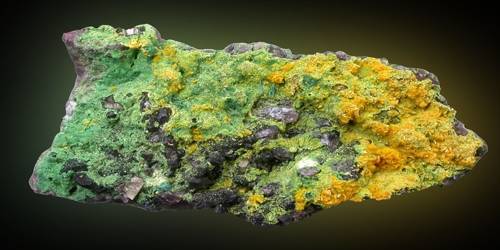 Carnotite is a potassium uranium vanadate radioactive mineral with chemical formula K2(UO2)2(VO4)2·3H2O. The water content can vary and small amounts of calcium, barium, magnesium, iron, and sodium are often present. It is a relatively uncommon mineral, yet common enough to be an important ore of uranium and vanadium. Remember, this is also a radioactive mineral and should be stored away from other minerals that are affected by radioactivity and human exposure should always be limited.

The mineral was first described in 1899 by French scientists M. M. C. Freidel and E. Cumenge, who identified it in specimens from Roc Creek in Montrose County, Colorado, United States. It is named for Marie Adolphe Carnot (1839 – 1920), a French mining engineer and chemist. Carnotite is a bright to a greenish-yellow mineral that occurs typically as crusts and flakes in sandstones. Amounts as low as one percent will color the sandstone a bright yellow. The high uranium content makes carnotite an important uranium ore. It is a secondary vanadium and uranium mineral usually found in sedimentary rocks in arid climates.

In the United States, it is an important ore of uranium in the Colorado Plateau region of the United States where it occurs as disseminations in sandstone and concentrations around petrified logs. It also occurs in the U.S. states of Wyoming, Colorado, South Dakota, Nevada, Arizona, and Utah. It also occurs incidentally in Grants, New Mexico and Carbon County, Pennsylvania.