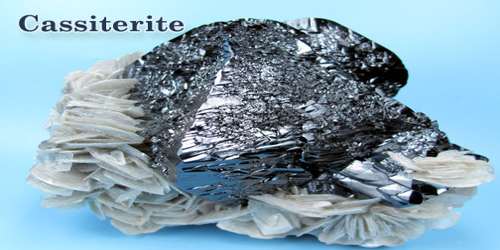 Cassiterite, also called tinstone, is a tin oxide mineral, SnO2, which is the most important source of tin, and most of the world’s supply of tin is obtained by mining cassiterite. It is colorless when pure, but brown or black when iron impurities are present. Commercially important quantities occur in placer deposits, but cassiterite also occurs in granite and pegmatites. It is generally opaque, but it is translucent in thin crystals. Its luster and multiple crystal faces produce a desirable gem. Cassiterite has been the chief tin ore throughout ancient history and remains the most important source of tin today.

The name derives from the Greek ‘kassiteros’ for “tin”; or from the Phoenician word Cassiterid referring to the islands of Ireland and Great Britain, the ancient sources of tin; or, as Roman Ghirshman (1954) suggests, from the region of the Kassites, an ancient people in west and central Iran.

Small amounts of primary cassiterite are found in igneous and metamorphic rocks throughout the world. It is also a residual mineral found in soils and sediments. Cassiterite is more resistant to weathering than many other minerals, and that causes it to be concentrated in stream and shoreline sediments. Although cassiterite is the most important ore of tin, it has only been found in minable concentrations in a few locations.

Early in the 15th century, the cassiterite veins in Saxony and Bohemia were mined for tin; peak production occurred there in the 17th century. In the 18th and much of the 19th centuries, the very large vein deposits of Cornwall were the major source of tin. Today most of the world’s cassiterite is mined in Malaysia, Indonesia, Bolivia, Nigeria, Myanmar (Burma), Thailand, and parts of China; other countries produce smaller amounts.

History: “Cassiterite” has been mined throughout ancient history and remains the most important source of tin today. The first alloy, used on a large scale since 3000 BC, was bronze, an alloy of tin and copper. After 600 BC, pure metallic tin was produced. Pewter, which is an alloy of 85-90% tin with the remainder commonly consisting of copper, antimony, and lead, was used for flatware from the Bronze Age until the 20th century. In modern times, tin is used in many alloys, most notably tin/lead soft solders, which are typically 60% or more tin. Another large application for tin is corrosion-resistant tin plating of steel. Because of its low toxicity, tin-plated metal is commonly used for food packaging as tin cans, which are made mostly of steel.

Many of the commercial Cassiterite deposits exist in placer stream deposits where this very heavy mineral collects as rounded water-worn pebbles. Cassiterite is an economically important mineral, being the primary ore of the metal tin. It is also used as a collectors mineral with the transparent forms being highly desired. 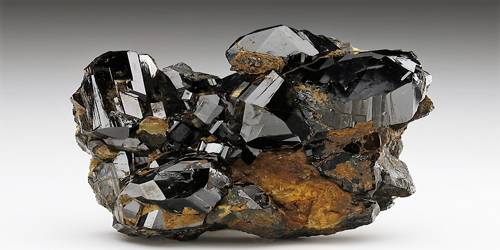 Occurrence and Properties of Cassiterite –

Most sources of cassiterite today are found in alluvial or placer deposits containing the resistant weathered grains. The best sources of primary cassiterite are found in the tin mines of Bolivia, where it is found in hydrothermal veins. Rwanda has a nascent cassiterite mining industry. Fighting over cassiterite deposits (particularly in Walikale) is a major cause of the conflict waged in eastern parts of the Democratic Republic of the Congo. This has led to cassiterite being considered a conflict mineral.

Primary deposits of cassiterite worth mining are almost always found in high-temperature hydrothermal veins that accompany granitic intrusions. There, cassiterite can be associated with tourmaline, topaz, fluorite, and apatite. Important deposits of primary cassiterite are found in Australia, Bolivia, Brazil, China, the Democratic Republic of the Congo, England, Peru, Portugal, Russia, Rwanda, Spain, and the countries of Southeast Asia.

Cassiterite is a widespread minor constituent of igneous rocks. The Bolivian veins and the old exhausted workings of Cornwall, England, are concentrated in high temperature quartz veins and pegmatites associated with granitic intrusives. The veins commonly contain tourmaline, topaz, fluorite, apatite, wolframite, molybdenite, and arsenopyrite. The mineral occurs extensively in Cornwall as surface deposits on Bodmin Moor, for example, where there are extensive traces of an hydraulic mining method known as streaming. The current major tin production comes from placer or alluvial deposits in Malaysia, Thailand, Indonesia, the Maakhir region of Somalia, and Russia. Hydraulic mining methods are used to concentrate mined ore, a process which relies on the high specific gravity of the SnO2 ore, of about 7.0.

Placer deposits of cassiterite are being worked today in Burma, China, the Democratic Republic of the Congo, Indonesia, Malaysia, Nigeria, and Rwanda. The United States does not have any important domestic sources of cassiterite or other tin minerals and is dependent upon other countries. There are deposits in Alaska, South Dakota and other states, but these deposits are either small, low grade, or in locations where development will be difficult.

Crystal twinning is common in cassiterite and most aggregate specimens show crystal twins. The typical twin is bent at a near-60-degree angle, forming an “elbow twin”. Botryoidal or reniform cassiterite is called wood tin.

Cassiterite has several properties that aid in its identification and enable it to be found in minable quantities. Its adamantine luster, high hardness, light streak, and high specific gravity are helpful in its identification. Its high specific gravity, resistance to weathering and physical durability enable it to survive stream transport and concentrate in placer deposits.

Cassiterite is also used as a gemstone and collector specimens when quality crystals are found. Gem-quality cassiterite is very rare. To be suitable for cutting faceted gems cassiterite must be transparent, free of fractures, be of high clarity and have an attractive color. When cut properly, cassiterite can be a beautiful gemstone. It is known to occur in brown, yellow, orange, red and green. Some stones have a strong fire that rivals the fire of diamond. 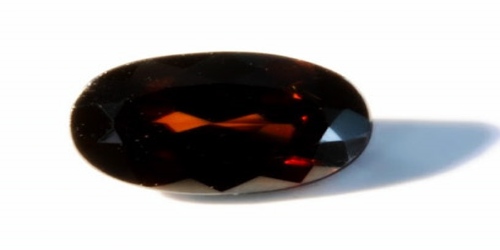 Cassiterite has a dispersion of 0.071, which is considerably higher than diamond’s dispersion of 0.044. Cassiterite’s high dispersion enables it to produce a fire that exceeds that of diamond. Strong fire is only seen in cassiterite gems with a light color. In many stones, a dark body color partially masks the fire.